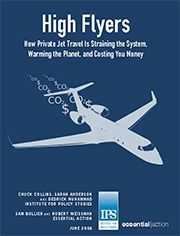 The Institute for Policy Study, a Washington-based social and environmental think tank, says the perceived boom in private jet travel is hurting the environment, stretching air traffic control and airports and could even be making commercial airline travel worse for those who can’t fly privately. In a podcast interview with AVweb, Chuck Collins, a senior scholar for IPS and author of the report, entitled “High Flyers: How Private Jet Travel Is Straining The System, Warming The Planet And Costing You Money,” said the disproportionate environmental impact of private air travel is obvious, and that he relied on FAA figures he says suggest that private jets don’t pay an equitable potion of the costs they cause in the air and at airports. “It’s about paying your fair share,” he said. But both the National Business Aviation Association and the General Aviation Manufacturers Association were quick to dismiss the report as inaccurate and unbalanced. “This report is 30 pages of nothing but outrageous claims and the warmed-over rhetoric used by the nation’s big airlines,” said NBAA President Ed Bolen. “It is unfortunate that at a time when businesses are struggling and communities are losing air service, we see political screed masquerading as a policy report.” Collins said his organization is independent and wasn’t trying to get in the middle of the years-long friction between airlines and GA over who pays what.

In fact, he noted, the report blames airlines for the congestion plaguing many major airports and also deals with the growing dissatisfaction of airline customers. But the report also says the growing use of private air travel (NBAA says it’s not actually growing) is robbing commercial air travel customers of their most powerful allies in maintaining or improving standards. “As the upper echelons of American society insulate themselves further from the traveling public via private jet travel, we run the risk of a dangerous loss of social cohesion,” the report, says. “As the super-rich and wealthy ‘opt-out’ of the public commercial air travel system, they withdraw their considerable political clout from making sure that the system works well for everyone.”