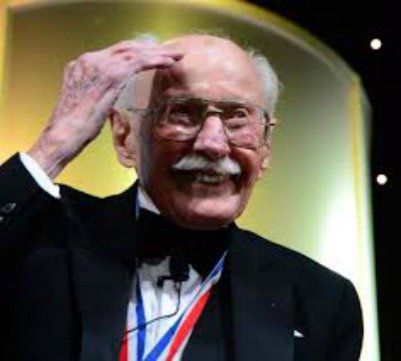 The 2014 Wright Brothers Memorial Trophy was awarded to airshow legend Robert L. Hoover during a ceremonial dinner in Washington, D.C., last Friday. The annual award is given to a living American by the National Aeronautical Association to honor significant public service of enduring value to aviation. “There are very few people in the world that capture the history, progress, importance, and sheer excitement of aviation and aerospace like Bob Hoover,” said Jim Albaugh, NAA chairman. “For 70 years he has set the standard for skill, leadership, and bravery which may last forever.”

Hoover, at age 92, has been at the forefront of the aviation world long enough to have met Orville Wright, Charles Lindbergh, James Doolittle, Neil Armstrong and virtually every other well-known aviator. Doolittle called him “the greatest stick-and-rudder man who ever lived.” Chuck Yeager once described Hoover as “the best pilot flying today.” The event included a clip from a documentary about Hoover’s life, Flying the Feathered Edge, which is now available on DVD.

Also, TV host David Hartman interviewed Hoover about his unique journey through aviation history; here is a video of that conversation.