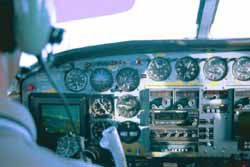 Aviation Safety Resources (ASR) has earned a patent for what it calls the Smart Recovery System for General Aviation Aircraft, which “automatically deploys the appropriate device” for a given emergency situation. The company says it is using sensor systems currently available in commercial and military aircraft. It “detects the environment” and “makes decisions based on monitoring data,” according to ASR. In practice, that would translate to a system that could deploy verbal warnings (if available), fire extinguishers, the autopilot, flight control, airbag and ballistic parachute recovery systems in response to diagnostic parameters. And those systems would beactivatedautomatically, with one caveat.

The system evaluates conditions, identifies an emergency situation, and commands available systems on the aircraft, automatically — unless overridden by the pilot — according to the company. ASR has pursued unique safety solutions for aircraft since at least 2000, though none have yet been widely adopted. The company previously earned a patent for its TriChute Safe Landing system. TriChute uses “ballistic systems” to separate an aircraft’s fuselage (passengers included) from its wings (and fuel), and then brings each component down under its own parachute. The idea is to reduce the chance of post-crash fire endangering the aircraft’s occupants. ASR says its new avionics system aims to offer a “comprehensive diagnostic” and “instant awareness” coupled with “integrated solutions.” The New Jersey-based company is still seeking investors and partners for further development.