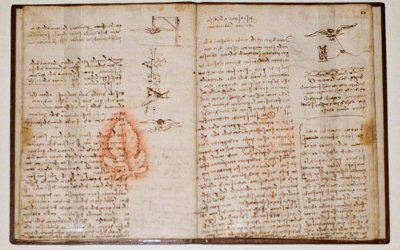 A notebook dating back to roughly 1505, filled by Leonardo da Vinci, with his ideas and sketches regarding bird and mechanical flight, will be on display at the Smithsonian’s National Air and Space Museum next month. The book is called the “Codex on the Flight of Birds” and it will be digitized, allowing visitors to flip its pages on monitors at the museum for the duration of its Sept. 13 to Oct. 22 stay. The showing will mark the (more than) 500-year-old book’s second appearance in America. It is recognized as one of the only books that da Vinci focused on a single subject.

The book will be placed in the same exhibition space as the Wright brothers’ 1903 Flyer, which is regarded as the first successful aircraft to incorporate principles and systems that followed through to modern planes. Air and Space Museum curator Peter Jakab told the Washington Post that da Vinci items rarely travel — even within Europe — making public display of the Codex in the U.S. “extraordinary.” The book covers da Vinci’s explorations into aerodynamics, structures and even where a pilot would need to be positioned to fly an aircraft. According to Jakab, “When you look at what the Wright brothers did, you see these concepts that da Vinci had identified in rudimentary form” more than 300 years before Orville and Wilbur were born.