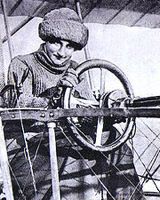 Around the world, women plan to celebrate the 100th anniversary of the first time a woman earned a pilot certificate by taking a woman or girl for her first flight in a general-aviation aircraft during the week of March 6 to 12. Raymonde De Laroche, a French balloonist, learned to fly a fixed-wing aircraft and was the first woman to receive a pilot certificate, on March 8, 1910. So far, pilots from the U.S., France, Spain, Mongolia, and many other countries have signed up to participate in what they hope will be a world-record-setting event. The Ninety-Nines, Women in Aviation International, the International Society of Woman Airline Pilots, EAA, and other groups have signed on to help with the effort. “Nothing can inspire a woman to learn to fly more than meeting a woman who became a pilot,” say the organizers of the Centennial of Women Pilots. Women who want to participate in the record attempt must pre-register at the group’s Web site.

Pilots who take a girl, age 8 to 17, for her first flight can also participate in EAA’s Young Eagles program at the same time. The Smithsonian National Air & Space Museum is also celebrating Women’s History Month on March 13 with a family day event at the Udvar-Hazy Center. Recently, Women in Aviation International wrapped up its annual meeting, in Orlando, Fla. Nearly 3,000 women and men attended, with visitors from 20 countries. EAA confirmed that it will host WomenVenture for the third consecutive year during this summer’s AirVenture Oshkosh. WomenVenture is a celebration of women’s achievements in flight designed to attract more women to all aspects of aviation. FAA Administrator Randy Babbitt spoke at the event; click here for the full text of his remarks. “Once again this year, everyone’s passion for aviation was displayed in their enthusiastic approach to learning, mentoring and expanding their aviation knowledge and advancing their aviation careers,” said WAI President Peggy Chabrian. Next year’s event will be held in Reno, Nev., Feb. 24-26.