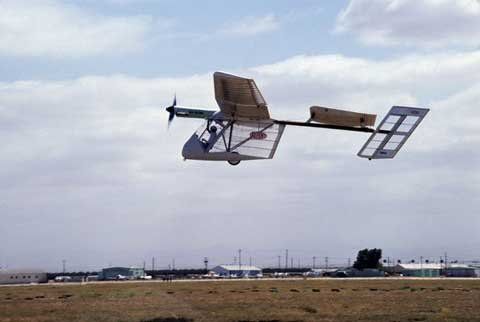 As the public relations-spawned dissection of two flights over the English Channel by electric aircraft late last week got into finer and finer details, a big-picture perspective surfaced in the AVweb inbox. The first flight of an electric aircraft over the English Channel happened more than 30 years ago but it was overshadowed by perhaps an even greater earlier accomplishment by its creator. Two years after Paul MacCready’s Gossamer Albatross crossed the channel under pedal power delivered by cyclist and pilot Bryan Allen, a solar-electric version of the aircraft made the crossing and then some. In fact, the Solar Challenger stayed in the air for five hours and 23 minutes and covered 163 miles on a flight from Pontois-Cormeilles Aerodrome, north of Paris, to RAF Manston in the U.K. That flight happened almost 34 years to the day (July 7, 1981) before the dust-up over bragging rights for the conquering of the Channel erupted between Airbus and two other cross-channel efforts.

As we reported last week, Slovenia-based Pipistrel intended to fly the Channel from France to England and back nonstop in its Alpha Electro on July 7, three days before Airbus was planning a carefully orchestrated public relations effort to fly its e-Fan across the 22-mile strip of ocean. The Pipistrel flight was cancelled when motor supplier Siemens told Pipistrel it didn’t want is motor used for the flight. Pipistrel made some PR hay of its own out of the Siemens decision but decided to stay on the ground. Then, on the night before Airbus’s well-publicized and thoroughly organized effort, French pilot Hugues Duval did the flight in an electric-powered Cri-Cri. Airbus officials later said they didn’t consider it on the same level of achievement because the Cri-Cri was air launched. And if we’re nitpicking, the MacCready flight from 1981 wasn’t the same, either. Airbus, the Cri-Cri and the Alpha Electro all use batteries to power the electric motors. The Solar Challenger didn’t have any batteries at all. More than 16,000 solar cells provided the power. History will judge who “won” this competition.