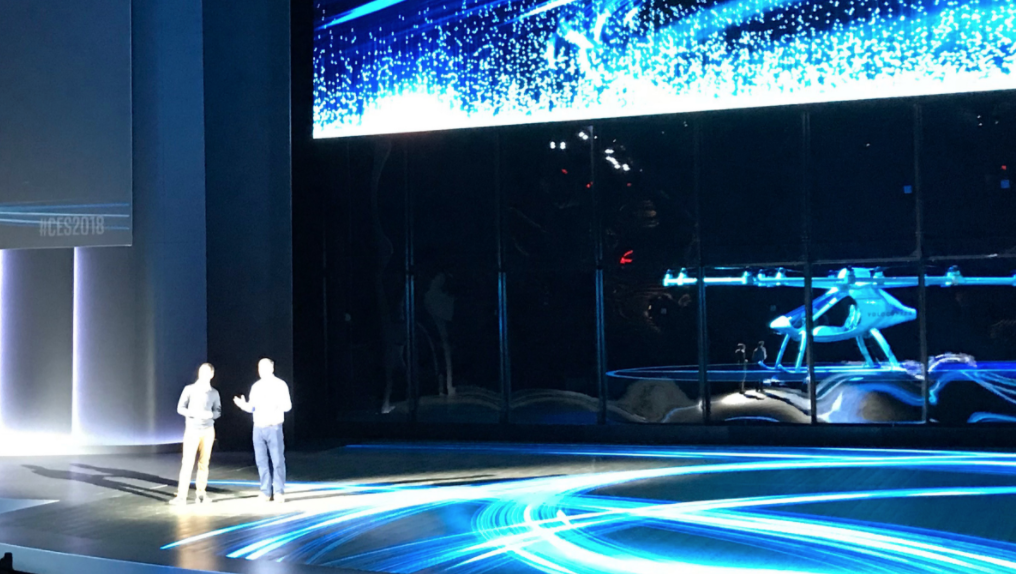 Volocopter, the German company that has long been working to develop a semi-autonomous VTOL, flew its aircraft for the first time in the U.S., on Monday. The aircraft flew briefly, unmanned and tethered, on a stage during the keynote at the Consumer Electronics Show in Las Vegas. Volocopter also announced it had flown with a passenger for the first time last month, taking Intel CEO Brian Krzanich for a short flight inside a hangar in Germany. The aircraft was remotely piloted while Krzanich went along for the ride. “That was the best flight I’ve ever had,” Krzanich said after landing. “Everybody will fly like this someday.”

According to The Verge, Intel has been working with Volocopter to integrate its drone technology into the aircraft. The Verge also reported that besides the aircraft that flew during the keynote, the 2X production version also is on display at the show. The 2X rotors are set a bit higher, to enhance safety, says Volocopter CEO Florian Reuter, and the interior is roomier. Flight endurance now is about 30 minutes, but Reuter said the goal is to be able to stay aloft for at least an hour. That should be enough for the urban routes that he expects the aircraft to serve. Company spokesperson Helena Treeck told AVweb on Tuesday the Volocopter will remain on display at CES for another four days, but will not fly again. She added there are currently no plans for the aircraft to appear elsewhere in the U.S. However, company representatives have told AVweb in the past they would love to bring the aircraft to the U.S. and fly at EAA AirVenture, so we’ll see.