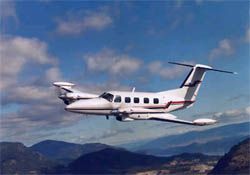 A Piper PA-31T Cheyenne turboprop twin was flying at 20,000 feet from Twin Falls, Idaho, to Seattle last Wednesday on an air ambulance mission when a window suddenly broke. Chris Fogg, a critical-care nurse, had just returned to his seat by the window and didn’t have his seatbelt on, and found himself partially outside of the airplane. “My left hand was on the ceiling and was holding me in, and my knees were up against the wall,” Fogg told the Seattle Times. “It was pretty scary … I have a vivid picture of looking at the tail of the plane and seeing my headset dangling out of the plane.” He was alone in the cabin with the patient, and had to push as hard as he could to get enough air between his chest and the window to break the suction. Meanwhile, the pilot was unaware of the broken window, but knew there was a decompression problem and descended to 10,000 feet. The patient was not in danger because he was on oxygen, according to reports. The pilot made an emergency landing in Boise, and Fogg got 13 stitches for the wound to his head. “I guess it wasn’t my day to die,” he told the Times. “For anyone else, I think he would have been sucked completely out, but for some reason I was spared, and I don’t know why.”