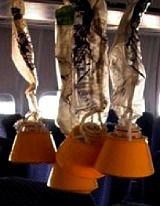 An FAA order to remove supplemental oxygen from airline lavatories puts passengers and crew at risk, the Association of Flight Attendants told USA Today last week. The order, made earlier this year in conjunction with the FBI and TSA, was a “precautionary measure,” the FAA said, because the chemical oxygen generators were easily accessible and could be “manipulated to create a flight hazard.” The backup plan, if an aircraft decompresses at altitude and passengers or crew members are in the lavatory, is for flight attendants to assist them — but the AFA says by the time it’s safe for them to do so, it might already be too late.

According to the FAA, exposure to cabin altitudes in excess of 25,000 feet for more than two minutes without supplemental oxygen can cause permanent brain damage. Most people would be unconscious within 3 to 10 minutes. The AFA says F/A training stipulates that in the event of a decompression, attendants should grab the nearest available fixed oxygen mask and remain there until a pilot says it’s safe to move about the cabin and assist passengers. Only then could the F/As retrieve a portable mask to help the lavatory occupants. The FAA said it’s working with aircraft manufacturers to develop and approve a secure lavatory oxygen system, but that could take up to four years. In the meantime, the FAA said, “the slight risk to a small number of individuals is outweighed by the elimination of a greater security risk.”