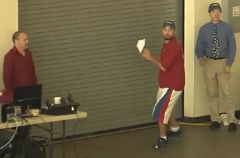 The quiet world of competitive paper airplane flying got some unusual attention this weekend when Joe Ayoob, a former quarterback for the University of California at Berkeley, set a new world record for distance, 226 feet and 10 inches, inside a 747 hangar at McClellan Air Force Base, near Sacramento. Ayoob broke the former record by 19.5 feet. “It was a proud moment,” said Ayoob. “I used to make a paper airplane every day when I was a kid. I love it.” The YouTube video recording the event (right) went viral on sports and news sites in the U.S., U.K. and Australia, and by Wednesday morning, the humble website of John Collins, the designer of the winning glider, known as “the paper airplane guy,” was unavailable due to “exceeded bandwidth.” Collins and Ayoob have been working together for over a year.

Collins has written a couple of popular books, The Gliding Flight and Fantastic Flight, that use the art of paper folding to help teach kids about aerodynamics and the scientific method. Sunday’s flight was recorded on video and measured by a surveyor with a laser, to qualify for the Guinness book of world records. It will take about three to six months for the record to be made official. The flight beat the record currently held by Stephen Krieger, of Bellevue, Wash. “Stephen is telling me he thinks he can beat our distance,” Collins told the Marin Independent Journal. “So it’s on.”