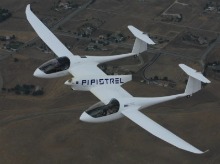 The CAFE Foundation on Thursday released the final results from its NASA Green Flight Challenge, held two weeks ago in California. The figures show a “profound difference” in energy use between the two electric-powered winners and the runners-up, which were powered by gasoline and hybrid engines, according to Dean Sigler, posting at the CAFE blog. Those differences are “surprising,” Sigler said, since all the competitors were “extremely clean” motorgliders, with lift-to-drag ratios between 25-to-1 and 35-to-1. Possible explanations for the differences could be the low cooling drag for electric aircraft and the overall efficiency of the electric motors, Sigler said. Detailed statistics for the four competing aircraft, including fuel consumption, time, and distance, are now posted on the CAFE blog.

According to NASA, the winning aircraft, Pipistrel’s Taurus G4, made good use of the multi-body concept, with a twin-fuselage design. “This accomplished a 61 percent useful load fraction (or empty weight fraction of 39 percent),” NASA said in a news release.”This span-loading structural benefit is similar to that accomplished by the NASA Hybrid Wing Body concept. The Taurus G4 also achieved a motor/controller efficiency of 96 percent, and utilized the largest battery pack ever assembled for auto or aviation use of 100 kilowatt hours, which included a 30-minute reserve capacity.” The competition showed that small aircraft can achieve “twice the efficiency of the most efficient production automobilestoday, while traveling at over twice the speed,” NASA said.