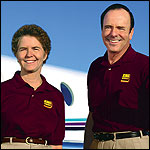 John and Martha King’s brush with the authorities in Santa Barbara on Saturday is apparently the second time this airplane has been detained and its pilot questioned because it shares an N-number with a Cessna 150 stolen eight years ago. According to aviation blogger Max Trescott, former Cessna employee Jim Pitman picked up the factory-fresh Skyhawk in Independence and flew it to Wichita for meetings. On landing he was met by Wichita police, who quickly ironed out the mix-up and sent him on his way. Why that didn’t trigger an update to the databases that were consulted to create the situation in Santa Barbara is a question sure to come up as aviation group leaders, including AOPA President Craig Fuller, demand answers from authorities over the treatment of the Kings. As we reported earlier, aviation’s most prominent husband-and-wife team is calling on government agencies to keep their databases up to date and warning pilots and aircraft owners they could be next to be surrounded by heavily armed police, handcuffed and detained because of a bit of miscommunication.

The Kings spent about 30 scary minutes in the custody of Santa Barbara, Calif., police at the Santa Barbara Airport. As in the incident in Wichita, authorities thought their leased Cessna 172 was a Cessna 150 that had been stolen eight years previously in Texas. The 172, which is owned by Cessna Aircraft, was assigned the N-number (50545) of the stolen 150 in 2009, years after the FAA had cancelled that registration on the 150. Apparently no one told the El Paso Intelligence Center, an arm of the Drug Enforcement Agency, and other government departments that keeps tabs on, among other things, flights of stolen aircraft. A quick check of the FAA database would have revealed the current registration and shown the cancelled one. That didn’t happen because when the Kings filed IFR for their flight from San Diego to meet friends in Santa Barbara, the local police were alerted to intercept the aircraft when it landed. As Martha King told us in the accompanying podcast, what followed was, in her opinion, unnecessarily dangerous and uncomfortable.

King says they were approached by police prepared for the worst, with guns drawn and others taking cover behind the doors of the four police cars that responded. Although anyone who has met the Kings would describe them as anything but threatening in appearance and demeanor, the police took no chances and maintained their aggressive stance through the ordeal. “I would have thought at that point when they got us out it would have ratcheted down quite a bit because I don’t think we exactly look like your typical airplane thief,” she said. The Kings were not hurt and the airplane was not damaged. The police did not apologize but did justify their actions by saying it was a report that had to be checked out, King said. The Kings said they went public with their experience in hopes that law enforcement agencies will double-check stolen aircraft reports and to warn pilots that there’s a chance their N-number could come up under similar circumstances.