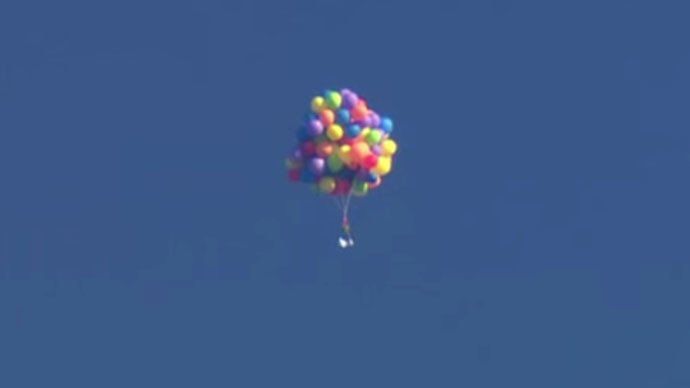 A high-flying entrepreneur came down to earth in a Calgary jail cell late Sunday after his multi-balloon publicity stunt ended with a parachute drop into the western Canadian city. Daniel Boria, 26, was charged with mischief endangering life after he attached a “$20 lawn chair” to 110 helium-filled balloons with the intent of skydiving from the chair into the middle of the Calgary Stampede, a huge rodeo and festival underway in the Alberta city. Boria, who came up with the stunt as a way to publicize his cleaning business, spent the night in jail and spoke with reporters on Monday. “It was incredible. It was the most surreal experience you can ever imagine. I was just by myself on a $20 lawn chair up in the sky above the clouds,” he told a television network.

Boria said winds kept him from reaching his destination and he bailed out when he started heading into the clouds. He apparently didn’t carry an air rifle to allow him to shoot balloons to regulate his altitude. Global News reported that officials at Calgary International Airport estimated his altitude at between 8,000 and 10,000 feet. “At one point I was looking up at the balloons, they were popping, the chair was shaking and I was looking down at my feet dangling through the clouds at a 747 flight taking off and a few landing,” Boria toldthe CBC. After jumping from the chair, he landed about a mile from the Stampede grounds in a small park. He sprained his ankle but was otherwise uninjured.

Since his arrest, the Calgary Police Service’s Facebook page has filled up with comments urging the charges be dropped. The police are so far unmoved.”I don’t think any publicity stunt is worth your life, nor obviously the life or property of somebody else,” Insp. Kyle Grant told the Calgary Herald.Grant said Transport Canada is also likely to chip in with charges under the Aeronautics Act. “I think he will end up out-of-pocket quite a bit. It probably would have been cheaper to get a billboard,” he said.