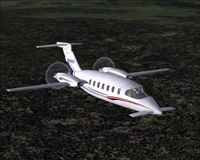 The Piaggio Avanti normally turns heads because of its unconventional configuration but now it’s attracting the attention of noise-conscious Naples, Fla., for its unconventional sound. The Naples Airport Authority is working with Avantair, a fractional and charter company that operates the Italian twin turboprop pusher, to minimize the impact of the unique noise it makes. It’s not that the Avanti is particularly loud. In fact, according to FAA measurements (PDF – small print, so be ready to use the “zoom” feature in your PDF reader), there are plenty of aircraft that emit more decibels. However, the configuration of the Avanti, according to a Wikipedia entry, results in the wing wake and engine exhaust hitting the props to create a square wave noise. The unscientific description offered by Alan Parker, chairman of the airport authority’s technical committee, is that the Avanti is “irritating loud” with a high pitch he likens to fingernails on a chalk board.

Parker told the Naples Daily News the sound made by the Avanti disrupts conversations and regular activities in the neighborhoods near the airport. He stressed that the airport authority isn’t trying to ban the aircraft, which make about 20 visits a month to Naples. Avantair Chief Pilot William Allbright said pilots are being advised to invoke manufacturer-suggested noise abatement procedures, including cutting propeller revolutions from the normal 2,000 to 1,800. “We are now going to increase our diligence and make sure that our pilots are using these techniques at Naples,” Allbright said. The airport is also updating its FAA-mandated Part 150 noise compatibility data to reflect changes in demographics and neighboring activity to establish flight corridors that have the least negative impact on residents and businesses.