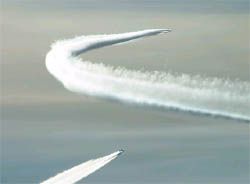 NASA is flying a DC-8 “flying laboratory” out of its Dryden facility to conduct biofuel tests that aim to collect data on emissions, engine performance and contrails with biofuels, the agency announced Friday. The flights began on Feb. 28 and will continue for three weeks. The Alternative Fuel Effects on Contrails and Cruise Emissions (ACCESS) research will take the DC-8 as high as 40,000 feet. A NASA Falcon jet will fly in trail collecting data over a range of 300 feet to 10 miles behind the larger jet. The DC-8 will be flown on both JP-8 jet fuel and a 50-50 blend of JP8 and fuel derived from camelina plants. But commercial aircraft flying in the region may also serve as targets of opportunity for the test, according to NASA.

The flights are being conducted from NASA’s Dryden facility in Southern California and will be flown mostly in restricted airspace. However NASA says that “if weather conditions permit, the Falcon jet will trail commercial aircraft flying in the Southern California region, in coordination with air traffic controllers.” NASA says the Falcon will trail the commercial jets at a distance of 10 miles to survey the airliner’s exhaust emissions. The tests build on previous studies conducted with ground-based instruments that observed emissions from the DC-8 as it burned alternative fuels on the ground. The next phase of the ACCESS program will take place in 2014. According to NASA, “We believe this study will improve understanding of contrails formation and quantify potential benefits of renewable alternate fuels in terms of aviation’s impact on the environment.”