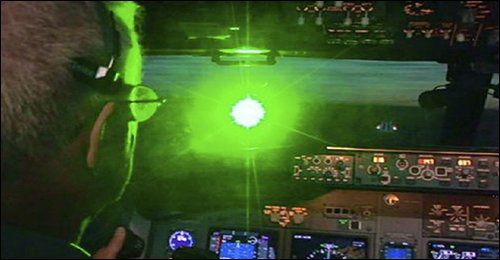 A new study suggests pilots hit by lasers in flight don’t suffer any lasting eye damage from the attacks. Researchers at the University of Calgary said they looked at the medical records of 58 male and three female pilots who were examined shortly after reporting a laser strike between April of 2012 and November of 2014. Many reported momentary blindness and blurry vision after being hit by the laser but all recovered. “Once their eyes settle down, they’re worried if there’s any permanent damage that could affect their ability to fly in the future,” Dr. Michael Fielden, an assistant clinical professor for the university’s Cumming School of Medicine, told the CBC. “Fortunately we haven’t found any permanent damage.”

The study was done with pilots from a single unidentified airline who were sent to Fielden by the airline as part of its safety program. But while the lack of permanent damage is good news to pilots, Fielden said that doesn’t mean laser strikes should be taken lightly. Safety issues notwithstanding, in terms of delays and passenger inconvenience, pointing that green or red light can be costly. “Pilots are not allowed to fly until their eyes are examined, so that’s multiple days off work,” he said.”And if the pilot is in Mexico, suddenly the plane is stuck in Mexico and requires another pilot flown down there, so there’s big delays for these airlines.” He said sales of laser pointers should be restricted.