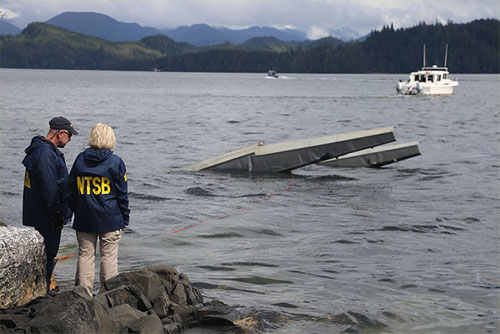 Following the midair collision of two floatplanes in Alaska and a tour helicopter crash in Hawaii, the NTSB says the tour industry should have an equivalent level of safety to commercial air carriers. Those crashes, plus another Alaska floatplane accident a week later, killed 11 people and injured 10.

“I’m not saying that we have to have the exact same regulations, but we do want an equivalent level of safety so that once somebody pays money to fly on an airplane, that they have confidence that there’s a high level of safety,” NTSB Chairman Robert Sumwalt told The Washington Post. He added that investigations of Part 135 operators have revealed that these operators need risk assessment procedures, onboard flight recorders and a similar level of training required of Part 121 operators.

“Basically, if you’re paying money for an airplane seat, there should be an equivalent level of safety,” Sumwalt said. The midair collision occurred on May 14 when two sightseeing floatplanes—an Otter and a Beaver—collided near Ketchikan, Alaska, while flying tourists from a cruise ship. Two weeks earlier in Hawaii, three people were killed when a Robinson R44 tour copter crashed in a suburban Hawaii community. Two more people were killed later in the same week as the first Ketchikan accident when another Beaver operated by Taquan Air crashed into Metlakatla Harbor while landing. Taquan also operated the Otter lost in the Ketchikan accident.

“While these tragic accidents are still under investigation, and no findings or causes have been determined, each crash underscores the urgency of improving the safety of charter flights by implementing existing NTSB safety recommendations,” Sumwalt said. “The need for those improvements is why the NTSB put Part 135 aircraft flight operations on the 2019 – 2020 Most Wanted List of transportation safety improvements.”