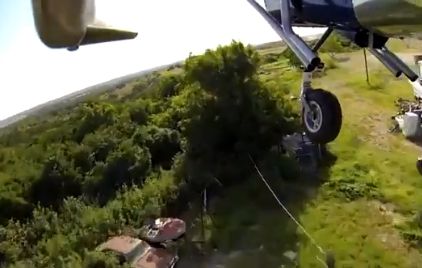 There were no injuries in the crash of a Bradley BA-100 kit-built aircraft (Wikipedia reference) in Killeen, Texas (about 70 miles north of Austin) on Aug. 10 but there is an illustrative video. The unidentified pilot secured several cameras to the aircraft before he took off on an abruptly ended flight from Skylark Airfield. The video record seems to be foremost in his mind as his first words after impact describe that the camera is still recording. “You’ve just survived a plane crash,” he says into the lens as local authorities arrive. As for the crash itself, it seems like engine problems started the sequence. A pretty well-edited video using views from the various cameras tells the story.

Skylark has 5,495 feet of available pavement and the aircraft used about a tenth of it. After flying runway heading for a few seconds after clearing the threshold at the other end, the engine can be heard faltering. There appeared to be likely emergency landing fields directly ahead but the pilot turned in what the NTSB says might have been an attempt to return to the field. The engine quit and the pilot headed for a relatively clear patch that had a big tree in front of it. It looks like the aircraft plowed into the tree about 20 feet from its top. The NTSB says the aircraft was substantially damaged but that the pilot was uninjured. (PDF)