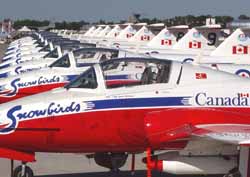 The Canadian Forces Snowbirds aerobatics performance team has flown the CT-114 Tutor since 1971 and now, according to documents obtained by Canada’s The Citizen, they are in the early stages of finding replacement aircraft. Amid tight budgeting guidelines and looming modernization costs across the whole of the Canadian Forces, authorities are prepared to spend $755 million for a new Snowbirds jet fleet. Tutors have been in the Canadian Forces inventory since the 1960s and the Snowbirds currently operate 11 of them. Nine fly formation maneuvers when two solo aircraft are included. Two jets are kept available as spares. It is not yet clear if the military will be replacing all of the aircraft to create a fleet of equal number. But the current Tutors are scheduled to retire by year-end 2020.

The subsonic jets offer a different and relatively graceful experience when compared to the faster and much louder routines performed by U.S. teams like the Air Force Thunderbirds and the Navy’s Blue Angels. Along those lines, the Canadian Forces do operate a version of the F-18, which critics note offers an operating cost 20 times higher than CT-114s. The Snowbirds serve as a recruiting tool for the Canadian Forces and the team has established an image of flying a large formation jet team. According to the Calgary Herald, the Canadian Forces reportedly considered using propeller-driven aircraft, but noted that other teams that made the switch saw a drop in airshow attendance. Leasing aircraft has also reportedly been considered. Whatever aircraft is chosen, it may be expected to serve in the role like the Tutor — for 30 or 40 years.