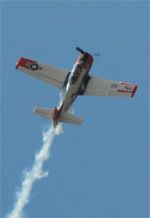 A decorated former Air Force pilot has been identified as the pilot killed Saturday when a T-28 performing at an airshow in Martinsburg, W.Va., crashed and exploded. Jack “Flash” Mangan, 54, was known as a meticulous and safety-conscious pilot. No one on the ground was hurt. The crash occurred more than a mile from the crowd. The aircraft was part of six-ship formation group the Trojan Horsemen performing at the Thunder Over the Blue Ridge show. According to the Martinsburg Journal, the crash airplane had just broken from a belly-to-belly maneuver with another T-28 when it “wobbled and went straight into the ground.”

Mangan, of Concord N.C., was an Air Force Academy graduate and former F-4 and F-15 pilot who flew with the Horsemen for five years. His son Sean Mangan, 27, told The Associated Press his father always stressed preparation and safety. “He was the best pilot I know,” Sean Mangan said. “Flying was his passion. He was a great pilot and a wonderful parent and husband.” The elder Mangan was president of a fast-food chain company.