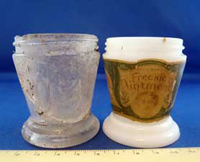 Pieces of glass found a year ago on Nikumaroro Island in the southwest Pacific may add to circumstantial evidence that Amelia Earheart lived there as a castaway, but there are complications.The International Group for Historic Aircraft Recovery (TIGHAR) have been on the otherwise uninhabited island searching for any evidence that Earhart crashed near the landmass 75 years ago when the pilot and her navigator, Fred Noonan, went missing. Among their latest findings are glass fragments that reassemble into the form a jar that is nearly identical to one once used to hold Dr. C. H. Berry’s Freckle Ointment. And “it’s well documented Amelia had freckles and disliked having them,” a TIGHAR researcher told Discover News. But the jar’s origins aren’t clear.

The glass pieces that form the jar are clear — the known examples of Dr. C. H. Berry’s Freckle Ointment jar are opaque. And TIGHAR has not with this announcement presented evidence that Earheart used the cream. Earhart disappeared while flying over the Pacific on July 2, 1937. Researchers have generally considered that Earhart’s Lockheed Electra ran out of fuel and crashed near Howland Island. TIGHAR researchers believe that Earhart’s last radio transmissions suggest her course would have taken her over Nikumaroro. The group has found glass shards from several different containers on the island. They also say that artifacts found in 1940 — and since lost — included a partial skeleton, parts of both a man’s shoe and a woman’s shoe, and a box. They claim that remnants of a fire were also found along with bird bones and turtle bones. TIGHAR researchers stipulate that some artifacts found on the island are “almost certainly” relics from other events in the island’s history, unrelated to Earhart.