Whither The Piston Twin?

One of the categories conspicuously missing from the raft of revived production aircraft in recent years is the piston-powered twin-engine airplane. Sure, New Piper is selling Seminoles and Senecas to flight schools and charter operators, while Raytheon still offers the Baron 58 series, but only in a normally aspirated, non-pressurized version. Meanwhile, turbine singles like the forthcoming New Piper Malibu Meridian and current-production models including the Socata TBM-700 and even the Pilatus PC-12 super-single offer greater reliability, smoother operation and lower workloads for their crew than even the most advanced piston twins.

Of course, there are a lot of reasons that very few models of new piston twins are on the market. Among them are training/currency and safety issues, operator insurance costs and the manufacturer’s product liability exposure. Similarly, there are a wide variety of used models on the market and they are often offered at a price much lower than an equivalent piston-powered single. And then there are the operating costs involved in keeping two sets of engines and systems happily fueled, maintained and upgraded. Finally, there are few exciting ideas or products in the new-manufacture medium-to-heavy piston twin market. Hanging two engines on the wings and fashioning a new nose for an existing single-engine design is old-hat: Been there, done that.

All of which might lead the casual observer to conclude that this segment of the new aircraft market is a dead duck. But that observer has obviously overlooked Adam Aircraft Industries (AAI) and the company’s M-309 display at EAA AirVenture 2000. In stark contrast to the fear and loathing that must be surging through the marketing, legal and engineering departments at other companies, AAI is forging ahead with plans to bring its unusual-but-practical-looking all-composite centerline-thrust piston twin to what it hopes is an eager market by 2003.

… Adam Aircraft Attempts To Spice Up The Market … 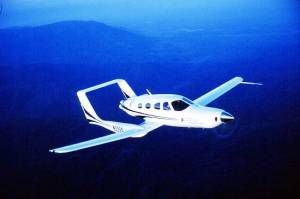 At the first glance through the brochure, the AAI M-309 looks like any other “vapor-plane”: Yet another example of someone’s dream twin, initially sketched on the back of a Denny’s placemat early one morning and later fleshed out on a computer. Its futuristic look might even prompt one to wonder aloud about the fate of models M-1 through -308. Actually, the M-309’s designation harks back to the fact that it represents the 309th complete design from Rutan. (Note to AAI: Eventually, you might want to consider giving your creation a name, not just a number.) But that glance would be faulty, as even the most cursory attempt to scratch the surface of the plane’s development should reveal.

For one, the placemat theory might be a good guess, but the guy doing the sketch was none other than Burt Rutan, the reigning and undisputed winner of the guru championship in unconventional composite aircraft design and manufacture. Rutan and his Mojave, Calif.-based Scaled Composites Inc. have a lengthy and repeatable track record of developing and bringing to maturity a number of unconventional designs over the years. As evidence, one need look no further this week than the experimental parking area at AirVenture to gaze upon row after row of his brainchildren. And as the final nail in the coffin of the “vapor-plane” theory, AAI has built the sucker and is displaying it at AirVenture. And it’s a full-size, proof-of-concept version, not an 85 percent, or even 50 percent scale model or a “concept-validation” craft built around a wrecked and salvaged example of a close cousin. Need further proof that the M-309 is for real? Look up: The prototype is flying every day during the week-long AirVenture 2000. Its first flight was in March.

Of course, a fledgling company hoping to bring a new design to market – especially a six-seat, pressurized, all-composite piston twin – had best have something other than a slick design going for it. AAI thinks it does. George F. “Rick” Adam Jr., a USAF Academy graduate and “dot-com” type who made his bucks in an e-business software concern as its chairman and CEO after a successful stint at investment firm Goldman Sachs and Company, is the company’s CEO and money guy. On his team is Cecil J. Miller, former vice president of operations at Cirrus Design and with a track record at Beech Aircraft during the time it was developing the all-composite Starship I, at American Aircraft when it was developing what has become the Grumman/Yankee line of slick, efficient singles and at Cessna, to name but a few names dropped on his resume. Rounding out AAI’s management is John Knudsen, a former FAA trial attorney – everyone’s entitled to one mistake – with a career in the U.S. Navy as a carrier-based attack pilot. 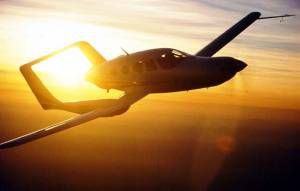 Okay, so AAI has the expertise, resources and experience to make this happen. But what about the airplane? As it currently exists, the M-309 resembles the results of an immoral encounter between a Cessna 337 Skymaster, a New Piper Malibu and a Vietnam-era OV-10 Bronco ground-attack platform. Its centerline-thrust, push-me-pull-you arrangement of two engines is straight from the one-of-a-kind 337 Skymaster series. Twin booms extend aft from the low-mounted wings where they house the trailing-link main landing gear before curving up into the horizontal stabilizer that is the aircraft’s highest point, reminiscent of the OV-10 Bronco’s tailfeathers. Rounding out the aesthetic package is the slightly extended nose – as with the Malibu – which houses a baggage compartment and fairs into the plane’s modern-looking greenhouse and cabin capable of seating six. Aft, the fuselage tapers off to house the rear engine and its all-important cooling scoops. Inside, AAI says the cabin will have dimensions smaller than – but “very close” to – a Beech Raytheon King Air 90.

So much for appearances, let’s look at numbers, which of course, are “subject to change” as the company’s promotional materials plainly state. Still, they are seemingly impressive: A 220-knot cruise at FL200 and top speed of 250 knots; a stall speed of 75 knots; and a useful load of 2,300 pounds balanced between unspecified empty and gross weights. Pressurization will provide a shirtsleeve environment of 8,000 feet msl at the M-309’s service ceiling of FL250. A generous load of 250 gallons of fuel will be carried in the plane’s wet wings within tanks that extend from root to tip. Power will come from a pair of FADEC-controlled TCM TSIO-550 turbocharged engines mounted on either end of the fuselage and turning Hartzell props and capable of 350 hp. So far, though, AAI is not sure about the actual horsepower output of the final engine configuration – they are reserving the right to de-rate the engines – but are adamant that their installation will be controlled with a single lever for each powerplant, instead of the forest of engine-control knobs and levers that greet pilots of current-production and older twins. 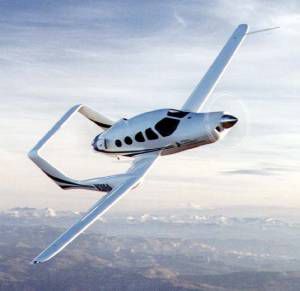 A similar blend of old and new is found in the aircraft’s structure. While some would maintain that using an all-composite process to fashion the airframe is brand-new, others would point to the Starship I, to the Raytheon Premier I and to the wide variety of shapes and sizes of completed, flying aircraft on display at AirVenture 2000 and conclude that the process of designing and certifying such an aircraft has reached maturity. And, of course, if anyone can bring together the competing considerations involved in taking a new design from research to ramp, it’s Burt Rutan. But that’s just the design. As anyone who has tried to bring a new plane to market can attest, designing and certifying it are certainly formidable hurdles. Getting the production process to fall into place and running smoothly is quite another. As is financing. Just ask Lancair. So clearly, there are further hurdles and an unknown number of surprises still facing the AAI team.

… A Healthy Dose Of Weight Control …

One of the major challenges facing composite aircraft manufacturers is weight control. Either a component is too strong and too heavy, or it’s too light and not strong enough. Since each part of a wing in a metal airplane takes up a known amount of space and weighs a specific amount, its total weight is known before assembly. The same is not necessarily so with composite structures. While the material’s weight is known – carbon fiber in the case of the M-309 – and the epoxy or other bonding material is accurately measured, meeting early weight projections is a daunting task for composite aircraft manufacturers. Just ask Raytheon and the staff who developed the Starship I. AAI officials tell AVweb that they are extremely aware of these problems and one of their major development efforts will include a strict weight-reduction program. According to COO Miller, this will include extensive testing of sample components to determine their strength. If they’re overbuilt, AAI will do what it can to reduce the weight of the material used to form the component during the cold-bond process the company is using, then test it again.

… And Looks To The Future

Without question, certification of the M-309 is AAI’s major hurdle. The company presently expects that achievement to be reached in 2003. And it would seem that goal is within reach, if the inevitable problems facing all developers of new aircraft can be minimized. But no grass is growing under its feet while doing flight testing, final engineering and gearing up for production. This week at AirVenture, the company announced it would accept “bids” for the first production examples of the M-309, although its price is stil not set. Under the company’s initial sales scheme, customers are asked to place deposits on bids for delivery positions six through 25. The minimum deposit is $25,000, and the maximum … well, let’s just say that the priority of the delivery position you buy will depend on the amount you bid. In the time between now and when your M-309 is finally delivered, your hard-earned bucks will be drawing interest and will be fully refundable.

In the meantime, AAI is forging ahead: It’s building a new manufacturing facility at Denver’s Centennial Airport and says it is actively recruiting engineers and technicians as it ramps up testing and production engineering.

Here’s hoping they make it work.