Notlong ago, a writer for a major aviation publication called to askmy opinion(s) on the subject of shock cooling. It turns out thecaller had already written his article, but he wanted to run someideas by me to make sure he wasn’t missing something. Since I geta lot of calls on this subject, I had some ready answers for him.Not necessarily correct answers—just ready answers.

I don’t think anybody has provably correct answers toquestions involving shock cooling of aircraft engines. To my wayof thinking, there is no scientific proof that shock coolingplays a significant role in cylinder damage in aviation."Scientific proof" is perhaps a poor choice of words.What I’m simply trying to say is, the hard evidence is scanty. Iknow of no fleet studies on this subject. I know of no pilot whocan say "I went up and did this and this and this to theengine, and then when I landed I found these cracks that weren’tthere before."

Still, it’s hard to argue with common sense, and common sensesays that if you thermal-cycle a piece of cast aluminum(especially while beating on it!) you just might induce it tocrack. Pilots can perhaps be forgiven for harboring a strong gutfeeling that yanking the throttle back is a good way to bring oncylinder cracking. Certainly, many millions of dollars’ worth ofspoiler kits and CHT systems have been sold to pilots on thisbasis over the years. 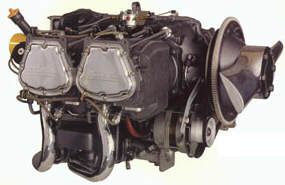 My own guttells me that shock cooling—while bound to induce dimensionalchanges in the engine—is not a great contributor to cylindercracking. We know it induces dimensional changes, because (forexample) valve sticking has been induced in some engines bysudden power reductions. (A Lycoming Flyer article once stated:"Engineering tests have demonstrated that valves will stickwhen a large amount of very cold air is directed over an enginewhich has been quickly throttled back after operating at normalrunning temperatures." See101 Ways to Extendthe Life of Your Engine, page 96.) But it’s a big jumpto go from that to saying you can make a cylinder head crack justby pulling the throttle back too quickly.

To my knowledge, Bob Hoover has not experienced any problemwith cylinder-head cracking on his Shrike, despite his rather oddpredisposition to feather both engines while in a redline dive.(Maybe this is what FAA meant by "cognitive defect"?Just kidding.)

Besides which, I think any careful examination of the conceptof "cooling" (as it applies to current aircraftengines) will leave one virtually empty-handed, because I thinkit could be argued that cooling fins on aircraft cylinders are ofmainly ornamental value. I suspect that you could hacksaw much ofthe finnage off, say, a TSIO-520’s cylinders and not affectinflight CHT readings by very much. As it happens, this isexactly what Continental did when it created the"lightweight" Crusader engine—the TSIO-520-AE used inthe Cessna T303. The cooling fins on this engine are fewer innumber, and about half the size of, those on a standard TSIO-520.And yet, CHTs in the T303 are remarkably cool. (One of ourreaders, in fact, reports a problem in getting CHTs to stay inthe green; see this month’s "Questions and Answers,"page 26.)

Various investigators have done "energy balancesheets" on aircraft engines, and the result is always thesame: Only about 12% of the heat energy generated in combustiongoes out an "air-cooled" engine’s cooling fins. Thebiggest fraction (around 44%) goes right out the exhaust pipe, ofcourse. Another 8% or so finds its way into the oil—which isquite interesting, because it means the oil plays almost as big arole in cooling your engine as air does. The remaining energyshows up as work at the crankshaft.

Throttle placement doesn’t have nearly as direct an effect onCHT as you might think. Back in 1983, there was an SAE paper (No.830718) by three Texas A&M researchers who tried to correlateOAT (outside air temp), CHT (cylinder head temp), EGT (exhaustgas temp), power settings, air density, and cowl pressure drop inLycoming TIO-540 engines. Their work was partly based on the NACACooling Correlation (NACA Report No. 683, published in 1940),which in turn was based on pioneering work done by Fred Weick inthe late 1920s. The Texas A&M group merely extended NACA’sapproach, verifying their results with inflight measurementstaken on a Piper Turbo Aztec and a Rockwell 700. One of their keyfindings was that the difference between CHT and OAT isproportional to the difference between EGT and CHT, which is (ifyou dwell on it long enough) intuitive, since the differencebetween the average exhaust temperature and CHT is what"drives" CHT changes to begin with. (If this isn’tintuitive to you, you may want to go back and re-read Fourier’sclassic Analytic Theory of Heat.) This portion of the group’sfindings might be summarized by saying that the stored heat ofthe cylinder head is proportional to the input heat, representedby EGT minus CHT.

But there are two aspects to cylinder cooling. One is the"supply side" aspect (which we have just been takingabout—all this business about EGT minus CHT), while the other isthe taking-away of heat, or "cooling" aspect. The TexasA&M group accounted for this too. They found that the storedheat is proportional to the input heat—proportional, that is, bya factor y. The factor y, in turn, is made up of engine powerraised to a certain exponent, divided by cooling airflow delta-praised to a certain exponent. The engine-power exponent isfractional; for the Rockwell 700 it turns out to be 0.33. (Itvaries from plane to plane depending, apparently, onpeculiarities of engine installation and operating envelope.) Theair-cooling delta-p exponent is also fractional (0.29). In plainEnglish: CHT depends on the cube root of engine power, divided bythe cube root (roughly) of the cooling-airflow pressure drop.

After a few rough scratchpad calculations, you find thatcutting an engine’s power by half (but leaving airspeed constant,such as in a descent) results in a CHT drop of only 10% or so, orabout 80 F. (Recall that in calculations of this sort, you wantto use a Rankine temperature scale, which begins at absolutezero, or minus-460F.) Most of the time, a 50% power cut isaccompanied by some loss of indicated airspeed, which would tendto offset the CHT drop, making it less than 80 F. The numbersare within reason, evidently. But is this kind of CHT dropcapable of trashing a set of cylinders? I doubt it.

Of course, the rate of the drop is plainly an important factorhere (not just the magnitude of the drop). In this connection, Iam reminded of an experiment once done by John Schwaner (ofSacramento Sky Ranch). It seems Schwaner, curious as to whetherhe could "crack" a cylinder at will, in a shopenvironment, one time took a cylinder that was heated to severalhundred degrees in an oven (I believe it was an O-320 jug,although here I’m going from memory) and dunked it in a bucket ofcold acetone. The abruptly cooled cylinder was later examined,and no abnormalities could be found in it.

And then there’s ordinary rain. Every pilot flies through rainat one time or another, and rain should be a very effectivecoolant (more so than mere air, certainly)—yet no one, as far asI can determine, ascribes cylinder damage to flying through toomuch rain. In fact, most pilots (I think) consider just theopposite to be true; namely, that flying through rain is good foran engine, because of the extra cooling.

Let us assume that a moderate downpour contains one cubiccentimeter (one gram) of water per cubic meter, and let usfurther assume a cooling airflow of 100 cubic meters per minutefor a high-performance engine. (David Thurston’s Design forFlying suggests 77 cubic meters per minute as typical for manyengines.) We might reasonably expect, therefore, that 100 gramsof water might enter the cowling per minute while flying in rain.Considering that water has a heat of vaporization of about 540cal/g, it’s not impossible for 100 g/min of rain influx to giveabout 54,000 cal/min of cooling, which is about 200 BritishThermal Units per minute.

The question is, how does this compare with the heat ofcombustion? We can do a rough calculation this way: We know that(by ASTM spec) avgas contains a minimum 18,720 BTU per pound orabout 112,320 BTU per gallon. If an O-470 burns 13 gal/hr incruise (or 78 lb/hr, roughly), the engine is capable of producing24,336 BTU per minute of combustion heat—if combustion is 100%efficient. In the real world of mixture maldistribution, richmixtures, and incomplete combustion, we can safely say thatprobably no more than 21,000 BTU/min of heat is actuallyliberated, of which 12%, or 2,520 BTU/min goes to the outsideworld via the cylinder cooling fins. If rainwater cooling was100% efficient (no droplets escaping between cooling fins; all ofthe water 100% evaporated in contact with fins), we might expectrain to reduce the cylinder fins’ burden by about 8% (200 dividedby 2,520). If you could somehow translate this into a direct CHTreduction, it might mean a reduction of 64F (assuming your CHTstarted out at 800 Rankine). That’s a pretty sizable reductionof CHT. In fact, it should qualify as shock cooling.

I think the fact that Navajos and 421s aren’t raining engineparts down on unsuspecting civilians while flying through precip(I was going to say while penetrating virga—but decided againstit) is pretty good evidence that "sudden cooling" of anair-cooled engine does not contribute in any dramatic way tocylinder-head cracking.

If shock cooling were a definite hazard, your engine shouldfall apart when you bring the mixture into idle cutoff at the endof a flight. CHTs fall at a rate of 100F/min or more in thefirst seconds of shutdown—triple the rate that starts thetypical "shock cooling" annunciator blinking. Doesanyone complain that repeated shutdowns are causing headcracking? Of course not.

Then why are we worried about pulling the throttle back?