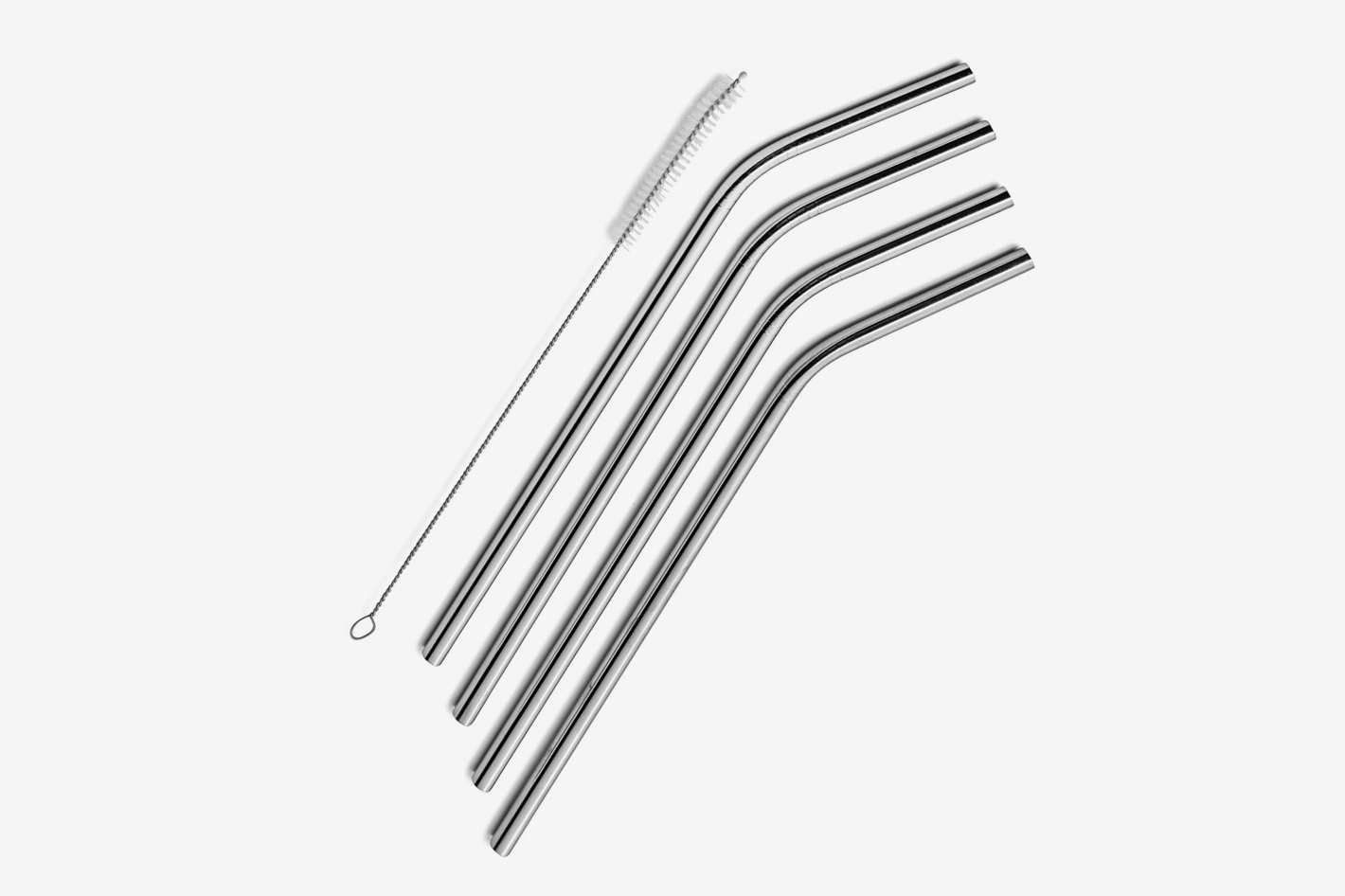 I was sitting in a traffic jam Friday and getting ever more steamed because I was already 20 minutes late. Adding to my dismay was that the local NPR station was running its spring fundraising drive and interrupting the programming every five minutes. Piling on top of that and irritating me further is that they were giving away stainless steel straws as a premium, complete with carrying bag and cleaning brush.

You can guess where I’m going with this, I suppose. I have a thing about stainless steel straws. They have become emblematic of a certain kind of environmental virtue signaling that I find particularly off-putting. (Standby, I’m gonna deftly segue to airplanes here in a couple of lines.)

Stainless steel straws are supposed to help mitigate the global scourge of disposable, single-use plastics. That’s a real thing, by the way, and needs attention, but doing it with straws you carry around in a little bag isn’t it. That’s because it’s not a market-based solution, or at least not much of one, because when given the choice of a free toss-away straw and remembering your car keys, wallet, cellphone, sunglasses and your stupid metal straw, guess which you’ll pick?

We’re generally not burdened with virtue signaling in aviation because I can think of at least several avowed environmentalists who tool along in airplanes burning 18 gallons an hour—or more. We’ve all made accommodations for this and I’m the last guy to make a moral judgment about it given my hydrocarbon-rich lifestyle.

Electric airplanes are, to a degree, virtue signaling, but I see that as a coattail to what they really represent—creative people using new technology to fundamentally reshape flying machines. Less noise and lower emissions may actually eventually drive the market appeal, but for now, the entire nascent industry is in what I think will be an extended proof-of-concept phase. Early adopters will try to make them work economically, but performance-compromised as e-airplanes are, that’s likely a niche for the next five years, if not longer.

When I interview aviation people from Europe at Aero, I’m always struck by the contrast in attitude toward environmental issues in aviation compared to the U.S. In Europe, I’d call it acceptance/resignation and in the U.S. curiosity/dismissiveness. The EU is lathered with all kinds of regulations and if the air isn’t noticeably cleaner there, it’s definitely a quieter place. Because regulators seem to target aviation, the industry there is more proactive in designing cleaner, quieter airplanes, hence the elevated interest in electrics.

At a Rotax event five years ago, one of the executives told me that noise and emissions regulations were intrusive and annoying, but because the company wants to keep on selling engines of all kinds, it spends lot of R&D money on clean and quiet. It’s no accident that the 912 iS’s lean setting is called eco mode.

That is a market-driven solution, by the way, somewhat forced by regulation. The 912 iS is not in every ultralight and light sport, but it’s probably in most of them. The 915 iS is finding traction both because of its higher horsepower, but also because it’s deemed to be more efficient and thus greener. But is it really, or just green shellac? I haven’t done the numbers on the 915, but the 912 iS definitely is more efficient.

But efficient enough to … to what? If you’re after an airborne Prius, forget it. But when I was discussing electric airplanes with Daher’s Nicolas Chabbert recently after Aero, he pointed out that whether we agree with emissions regulations on airplanes or not, they’re coming in some form and the aircraft industry needs to explore what it can to satisfy them. That’s in part why Daher got involved with Airbus on an electric airplane project—since aborted—and why, in part, it put autothrottles on the latest TBM 940 to eke a little efficiency out of the PT-6. The latter is a market-driven solution because it gives Daher a new model to sell.

At Aero, I reported on another environmental conundrum for aviation, specifically the fact that as the FAA tidies up work on the Piston Aviation Fuel Initiative to certify an unleaded 100-octane fuel, the EPA seems unlikely to declare a lead finding of endangerment. Ergo, no pressure to get rid of the lead.

Lycoming’s Michael Kraft suggested that overcoming this barrier will require that ever-popular MBA buzzword, the voice of the customer. Stainless steel straws here we come. But, wait a minute. I see an opening here.

Other than the environmental argument, which I’ve always seen as weak, the benefit of unleaded fuel is lower maintenance bills; no fouled sparkplugs, cleaner oil and less corrosion. So show me. I propose that GAMA, in concert with the engine manufacturers, put together a little demonstration and ad campaign to put some numbers on this. I can see it now … here’s your engine on 100LL, here it is on unleaded. Here’s your oil and so forth. Perhaps that shifts it from green-washing to the market solution that can actually solve some of these problems without resorting to carting around your own straw and a brush.

And by the way, just for the record, better than a plastic straw or a metal one are these candy cane paper straws. I buy them at the local Publix. They’re both cheap and biodegradable—the perfect market solution. But my real reason for buying them is they’re nicer to use than plastic or metal.

Note to Readers:No, it’s not something you said. Because of persistent denial of service attacks against AVweb, we’re moving the site to another platform. The commenting section will be unavailable for a time. We apologize for the inconvenience, but the site will be better for it in a week or two. In the meantime, if you have a comment,emailus and we’ll append it to the blog.

Didn’t even know that these things (paper straws) were still being made!

Have you thought of running for political office?

You’ve hit the nail on the head. The consumers drive the market. One can force regulations down our throats, by mandating lead out of the fuels, leaner emissions, etc; and the consumer will grudgingly accept it when forced, and only when forced. But, what if the FAA starts saying things like, run on unleaded fuels and your 2000-hour TBO can become a 3000-hour TBO? Now you are going to get a buy in by the consumer, and in fact, the consumer will actually demand it. Has the Lycoming, Continental, or the FAA ever made mention of something like that? Not that I have ever heard. But that shows a lack of forward thinking on the part of the manufacturers.

Those of us who have been around for more than a few decades can remember back in the 1960s when a car with 60,000 miles on it was considered to be worn out, and the engine was likely due for some major work. What happened, that now we routinely drive our cars 200,000 – 300,000 miles and they are still not worn out? (I own two with 250,000 and just sold one with 340,000 miles on it that still ran like new). Unleaded fuel is what happened. In 1974, new car engines were mandated to run on unleaded fuel. Jan 1, 1996, leaded gasoline was taken off the market for automobiles. This forced some changes in that the metallurgists had to come up with better valves and hardened valve seats. Additionally, since there was no longer lead in the fuel, and consequently present in the oil as a waste product for the oil to deal with, the lubricants also changed significantly.
We have continued to hang onto the lead in aviation. The resistance of the consumer is incredible, and mostly based on ignorance of the benefits. Anyone that works on small Continentals can readily see the damage the lead build up does to the valve guides if an engine is run on 100LL. New engines get sticky exhaust valves, then the lead build up on the exhaust valve stems wears the guides prematurely, and the top end needs overhauled long before it should be due. But instead of demanding a change to the fuels, we still hang onto the lead to make the turbocharged and high compression guys happy, and so the FBOs don’t have to carry multiple grades of fuel. Getting the lead out of avgas will also bring about an improvement in our lubricants as they will no longer have to deal with lead contamination. The metallurgical work as already been done for the automotive industry, and most newer aircraft cylinders already incorporate it.
In the mean time, mechanics still deal with lead poisoning (although most are unaware and should be tested for high lead blood levels), and we continue to prematurely overhaul engines that would otherwise continue running for many long and happy hours if they had been operating on unleaded fuel. How many aiarcraft owners help with their annuals by spending an afternoon with a dental pick picking lead balls out of their spark plugs and contaminate themselves with lead salts in the process? We, as consumers, should be demanding a switch to unleaded fuels, or at the very least a phase down of leaded fuels back to the much lower content of the old 80-octane red gas (although with a higher 100-octane rating for the high-performance guys), then eventually to no lead. It would be better for our engines, it would be better for all of us the handle fuels or get fuel on our hands when draining the sumps on a plane, and for those of us that are mechanics that routinely work on lead contaminated engine parts.
The auto industry did a 20-year phase down of leaded to unleaded fuels. And I recall all the griping about the government forcing unleaded fuels on us as consumers. Perhaps it’s time for the aviation industry to take a lesson from the auto industry and follow suit?
Jeff Scott
I agree with Paul Bertorelli that that “virtue signaling” is at most a “coattail” motive for switching to electric aircraft. There are so many tangible benefits that political correctness — to the extent that a given pilot even cares about that — absolutely pales in comparison.

I would happily trade all of that for an electric motor just as soon as battery technology can store enough energy for a two-hour flight at cruise power. Wake me when we get to that point!