The to-be-developed Eclipse jet is definitely center stage at EAA AirVenture. Though the Eclipse is high profile, it is by no means alone. Thursday, AVweb went in search of a few of the other jet makers to get updates on where they are, where they’re going, and when you will be able to fly their birds high and fast.

VisionAire Corporation Chairman and CEO Jim Rice has been working to bring his dream of a six-person VisionAire Vantage jet to fruition for going on 12 years now. All was going relatively well until last year, when the company went through a gut-wrenching period during which the project was frozen, nearly 100 employees were laid off, and the new production facility built in Ames, Iowa, was closed and rented out for storage. The near-meltdown was caused when the jet was found to be carrying 790 extra pounds … weight that threatened to nullify the company’s performance guarantees, FAA certification, and the jet’s marketability. Rather than just trying to make the airplane fly at the higher weight, which some advised, company officials made the difficult decision to freeze the program, and went to work shaving pounds from the VisionAireVantage airframe. Rice was determined not to wave the white flag. 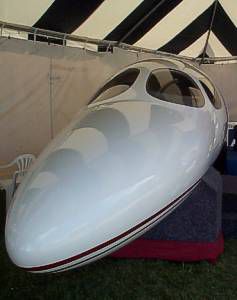 Vantage engineers set to work, trimming ounces here and ounces there, and managed to cut 390 pounds. The other 400 pounds was weight the program was forced to live with. To deal with the increase, engineers redesigned the jet’s wing to increase the plane’s gross weight. The tail was also extended 20 inches to help overcome a problem with ice collecting in the inlet. The design is now set and all systems are ‘go.’ “It was painful what happened last year. But it turns out it was all for the best,” Rice told AVweb. The redesign has been taken care of… now the challenge is finding the money to continue the program.

“Money’s a big part of it. If you think it’s lift and thrust and drag that makes an airplane fly, you’re wrong. It’s money,” said Rice. So far $100 million has been invested in the Vantage jet and another $100 million will be needed to bring it to production. “Can you believe I thought $50 million would have this plane flying?” asked Rice. The company currently has 150 individual investors who have ponied up from $500 to $4 million. “While the company was going through its problems,” says Vantage Program Manager Del Potts, “Jim (Rice) stopped going out after investment dollars. I think that’s admirable and says a lot for his character.” “Yeah, I don’t want to lose my reputation,” jokes Rice, “but I don’t want to spend the rest of my life in jail either.”

If Money Comes, So Will Certification

If Rice can find more investors willing to take a chance on VisionAire, he will have his $2.1 million Vantage jet ready for certification in 30 months. “I feel great technically,” says Rice. “I don’t know anything we’re doing that will keep us from being certified.” Except money. “Like kids say to their parents,” Rice smiles, “‘Send money.’ I need investors to send money.”

VisionAire has big plans that include more than just the Vantage jet. A smaller six-place called the VA-14 Spirit has taken shape on paper and will be “priced comparably to the Eclipse… under $1 million,” says VisionAire’s Future Works Vice President Tom Stark. A mock-up of that bird could be ready by Oshkosh 2001. A two-place $600,000 VA-12C Spirit is also being considered for development as a personal jet aircraft. Preliminary cruise numbers on the single-engine Spirit are projected at 400 knots. All those planes will come… if investors can be convinced that the market is there.

A Look Ahead To A New Century… Jet, That Is

Did someone say money? Oh, yes. Century Aerospace‘s Jay Morris is talking about cash, capital, investment dollars, moolah – as are the other officials at Century. They believe another $10 million will get their six-person Century Jet 100 to FAA certification. The company’s plans are to take the composite twin-engine turbine up for its first flight sometime over the next 24 months, with FAA certification predicted 12 months later. Fifty refundable $10,000-deposits have been taken so far and Morris is hoping for many more, not only from companies eager to have a fast plane, but from pilots looking to step up from turbos and piston twins. “We’d like to have 100-plus deposits by our first flight,” he told AVweb.

One of those first 50 customers showed up while AVweb was in the Century booth. Pilot and corporate VP Mike Berglund put his deposit down about a year and a half ago. “I’ll sell my Baron when my Century Jet is ready,” Berglund said. He flies about 150 hours a year, about 50/50 personal and business. “I think this will be easier than my Baron to fly,” Berglund says. “There’s less instrumentation.”

Century’s price for its jet is $2.7 million. As for the $836,500 being asked by Eclipse … “I just don’t understand how they can do it,” says Morris. “I know what it’s costing us to build ours, and they need all the same pieces and parts. However, if there’s a way they can make the pie (the number of pilots wanting turbines) significantly larger, then they can achieve economy of scale.” Though raising money has been difficult, Morris says, “I feel very good about this aircraft. We’re taking already-certified technology. This is nothing new to the FAA, so that’s given us a good level of confidence in getting certified. There are no planned miracles in this airplane. We’re going to be an assembler. We’ll bring other parts and put it together. That’s a key part of our company.”

The True Maverick In The Bunch

If $2.7 million isn’t to your liking, or if you don’t feel like waiting a couple of years to go fast, there is another option. The Maverick TwinJet 1500 can be yours for $300,000, with a slight catch. You’ll have to build part of it. The TwinJet 1500, you see, is a kitplane. Maverick President/CEO Robert Bornhofen says kits have been available for about 12 months now, and the fast-build kit will take upwards of 2,500 hours to complete. “We can deliver an airframe as long as the builder does 51 percent of the systems. We’re requiring people to use factory-authorized jigs and assembly fixtures.” Bornhofen wants his planes to be well-built. “The last thing I want is an incident in one of my planes.” 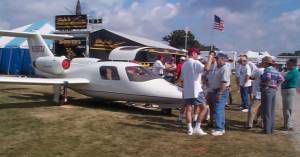 “This is a trainer. This was designed to be a Duchess with two jet engines. I wish Eclipse all the best in creating a whole new market for jets, because then there will be a need for a dependable, forgiving training airplane so people can build turbine time. We’ll train ’em. The training area will be the Maverick niche,” Bornhofen said. “For about as long as it will take someone to solo in a Cessna 172, we can solo them here. This is for non-professional pilots.”

Bornhofen was retired when he got into the aviation business, and had no aviation background. “I wondered why I couldn’t buy a personal jet, and when I couldn’t buy one, I decided to create one.” Bornhofen has been funding much of the project out of his own pocket. “I find I pay a lot of attention to detail that way,” he told AVweb. The biggest selling point of his TwinJet 1500? “It’s real. I flew it in.” The TwinJet is not certified and likely won’t be. The jet uses two converted surplus GE-T58 military helicopter engines, overhauled and zero-timed.

The amazing thing is that in spite of the hardships, Maverick, Century Aerospace and VisionAire aren’t the only companies willing to pound the pavement and work the phones to raise the money to get into the small jet business. According to VisionAire’s Tom Stark, “this is the beginning of the revolution. In five or ten years, the whole industry will have changed.” In the meantime, send money.