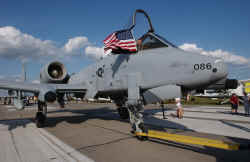 One of two A-10 Thunderbolt II “Warthog” close ground support attack jets Wednesday downed two protective static cables above power lines that cross Stockton Lake, Missouri, the Air Force Reserve has confirmed. Neither pilot was injured and both jets returned safely to the base. The single-seat twin-engine jets were operated by the Reserve’s 442nd Fighter Wing at Whiteman Air Force Base. A witness told local KY3 news that the lead jet “went underneath the power lines.” The Air Force says the second jet cut through the two static cables with its wing. The aircraft were flying a low-altitude navigational training mission at the time and the pilot of the strike aircraft has been removed from flight duty pending the results of an investigation. Damage to the aircraft was reportedly not severe. Now other aircraft may be required to fix the damage.

After the wire strike, electrical system monitoring devices sensed an anomaly and shut down power to the three transmission lines located below the stricken cables. The stricken static lines do not deliver power and are used as part of a system that protects the transmission lines from lightning. Without them, the system is considered compromised. Local energy management monitors rerouted power immediately after the strike and have not resumed transmission through the associated power lines. Until repairs are made, the transmission lines are more susceptible to damage from lightning but authorities say there is no immediate risk to the public. No customers have lost power due to the event and officials estimate that repairs to string the cables back across the lake could take up to two months and involve a helicopter. In the meanwhile, boaters will be discouraged from accessing the area of the lake that holds the now-submerged cables.