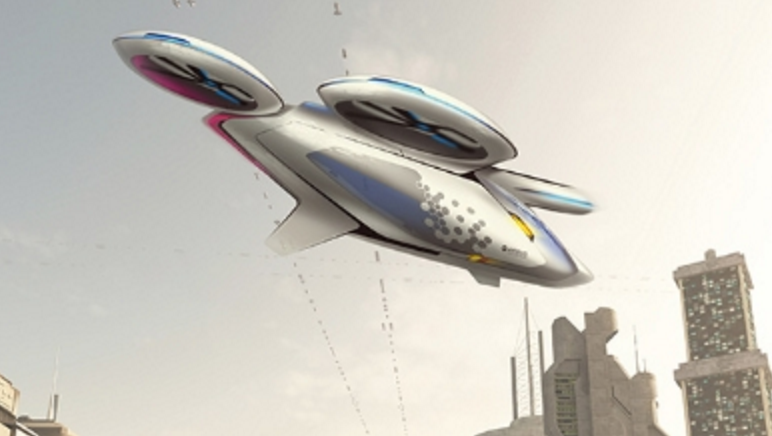 Airbus engineers based in Silicon Valley are working to develop “an autonomous flying vehicle platform,” called Vahana, that could provide transport for both passengers and cargo, the company has announced. Flight tests of the first vehicle prototype are slated for the end of 2017. Ultimately, the system could operate similarly to car-sharing applications, with the use of smartphones to book a vehicle, Airbus says. “We believe that global demand for this category of aircraft can support fleets of millions of vehicles worldwide,” said Rodin Lyasoff, the Airbus engineer leading the project at A3, the Airbus innovation outpost in Silicon Valley. “In as little as 10 years, we could have products on the market that revolutionize urban travel for millions of people.”

“Many of the technologies needed, such as batteries, motors and avionics are most of the way there,” said Lyasoff. The project will also need reliable sense-and-avoid technology, which is starting to be introduced in cars, but Airbus says no mature airborne solutions currently exist. “That’s one of the bigger challenges we aim to resolve as early as possible,” Lyasoff said. Since large numbers of vehicles would be needed, development, certification and manufacturing costs go down. “A3 is powering ahead with Vahana, and as is typical for Silicon Valley, the company thinks in terms of weeks, not years,” Airbus said. Officially underway since February, the project’s team of internal and external developers and partners has agreed on a vehicle design and are beginning to build and test vehicle subsystems.

Meanwhile, developers in France and Germany are working on an electrically operated platform concept for multiple passengers, Airbus said. This aerial vehicle, which goes by the working title of CityAirbus, would have multiple propellers and would resemble a small drone in its basic design. While initially it would be operated by a pilot – similarly to a helicopter – to allow for quick entry into the market, it would switch over to full autonomous operations once regulations are in place, directly benefitting from Vahana’s contribution.The feasibility study has already been completed and the conclusion is favorable, Airbus said. Customers would use an app to book a seat on a CityAirbus, proceed to the nearest helipad and “climb aboard to be whisked away to their destination,” Airbus said. Unlike Vahana, several passengers share the aircraft.