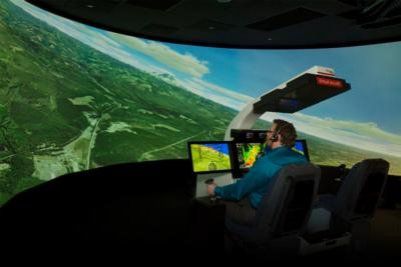 Rockwell Collins has been tapped to lead a NASA-sponsored study into “single pilot” operations of commercial airliners. In a news release last month, the company said the study will determine the feasibility of SPO in airliners while acknowledging the considerable barriers in the way. “The aviation industry has been looking at the potential for single-pilot operations for quite some time to address concerns about future pilot shortages, but there are a number of technical, certification and policy considerations that must be addressed along the way,” said John Borghese, vice president of Rockwell Collins’ Advanced Technology Center, in a statement. While there might only be one pilot on board the aircraft, that doesn’t necessarily mean he or she will be alone in operating the flight.

NASA is also looking at the feasibility of having some aspects of an airliner’s flight operated from ground stations. In a separate study (PDF), NASA and several partners, including Rockwell Collins, is looking at developing the appropriate ground station that leverages the burgeoning technologies for unmanned aerial systems, including sense and avoid systems. In practice, the study notes that for most of an airliner’s typical flights, a single pilot is all that’s required. The ground station personnel would help out more on departure and approaches and take over the full responsibilities of a first officer in an emergency. Presumably the ground station will be able to direct an autoland in case the pilot on board becomes incapacitated.