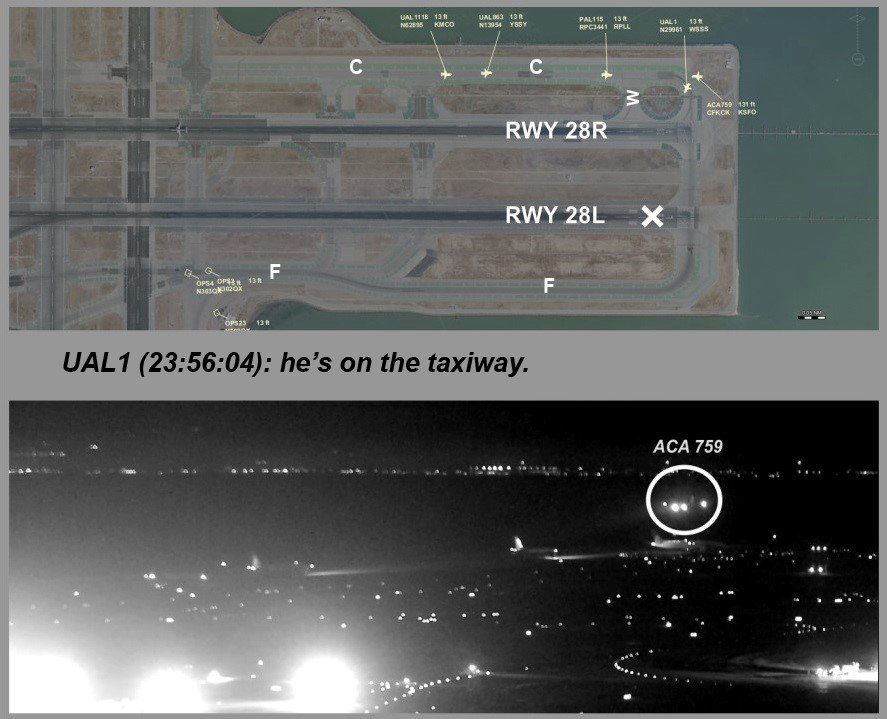 The NTSB has opened the docket on Air Canada Flight 759, which mistakenly overflew a taxiway at San Francisco International Airport, barely missing four other airplanes. Information released by the NTSB included the video below, showing Flight 759 in the upper left, and more than 500 pages of reports, interviews, documents and data on the incident. The event occurred on the night of July 7, 2017.

According to the NTSB, the A320 was cleared to land on runway 28R at San Francisco International Airport (SFO) but lined up for parallel taxiway C instead. Four other airliners awaiting takeoff clearance were on taxiway C. Flight 759 initiated a go-around after overflying the first airplane on the taxiway.

From statements made in an interview with investigators, it appears as though the captain mistook the lights on runway 28R for those on 28L and taxiway C lights for 28R runway lights. Runway 28L was closed at the time of the incident and its lights were off. The flight data recorder shows that the go-around was initiated at 84 feet AGL and the aircraft descended to an altitude of 59 feet AGL before it began to climb. The captain had approximately 20,000 hours flight time, more than 4,500 of which was in the A320.

The docket only contains the information collected by investigators. The NTSB will release its analysis, recommendations and probable cause at a later time.