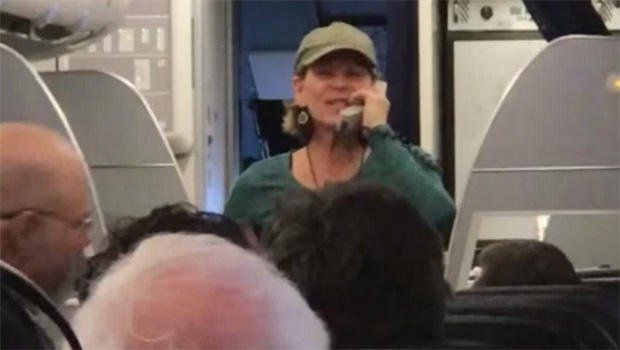 About 20 passengers aboard a United Airlines flight decided they really didn’t need to go to San Francisco after all on Saturday after their casually dressed captain delivered a bizarre rant over the PA system. The unidentified pilot boarded the aircraft in Austin wearing a ball cap and a t-shirt and opened by asking the passengers if they were OL with that. Her generous audience joined in what they initially perceived as some levity in the rule-bound world of commercial air travel. They soon came to appreciate those rules as the monologue descended into a profane rant about politics and her divorce. “I just left my @united flight 455 ‘cos the captain demonstrated that she was not mentally in a safe space,” passenger Randy Reiss tweeted after making his escape.

The pilot was jovial and addressing people individually during her impromptu announcement. She invited passengers to leave if they didn’t “feel safe” after assuring them that she would not have her hands on the controls during the flight.“Don’t worry. I’m going to let my copilot fly it. He’s a man,” she said to audible gasps recorded on cellphone video. She eventually walked to the back of the aircraft as flight attendants opened the door to let passengers off. Police were standing by as the pilot followed the passengers into the terminal and United issued a statement saying they were investigating. “We removed her from the flight,” an airline spokesman told local media. “We’re going to discuss this matter with her.” A new flight crew was found and the flight left about two hours late.