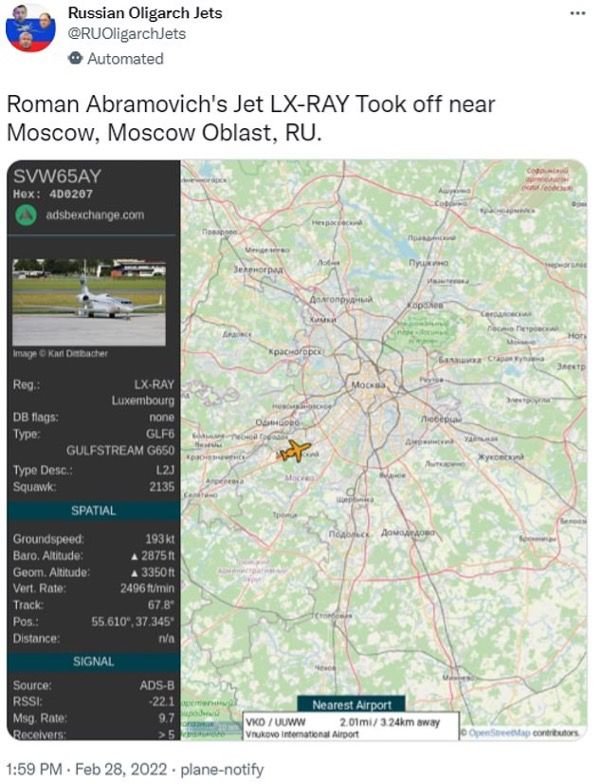 Jack Sweeney, the 19-year-old college freshman who made recent headlines for tweeting the real-time whereabouts of Elon Musk’s Gulfstream, has taken his pastime a big, perhaps more dangerous, step forward. With the ongoing economic and airspace sanctions on Russia following its invasion of Ukraine, the University of Central Florida information technology major has now established a Twitter account tracking 39 private aircraft operated by Russia’s richest and most powerful oligarchs, including Vladimir Potanin, Roman Abranovich (owner of the elite U.K. Chelsea Football Club soccer team) and billionaire steel magnate Alexander Abramov. According to reports in the U.K. Daily Mail, the Twitter account now has better than 64,000 followers, all with access to regular reports of the movements of the aircraft.

As with his tracking program for Musk’s jet, Sweeney uses ADS-B data supplemented by computer bots to unveil the current locations of the aircraft.

“The aircrafts [sic] these oligarchs have are absolutely crazy,” Sweeney told news outlet Bloomberg. “Their planes are huge compared to other jets. Before this, I didn’t even know there were these influential oligarchs like this. They probably do have a decent amount of power from what I can understand.” If Musk’s reaction to having his whereabouts very publicly displayed was “testy,” it stands to reason Sweeney could find the Russian business power elite far more … resistant.

Sweeney has also been asked about tracking Russian President Vladimir Putin’s state aircraft, and added a Twitter account to track the state-operated jet. He told NBC, “It’s just been crazy. I just figured some people would be interested in it.”