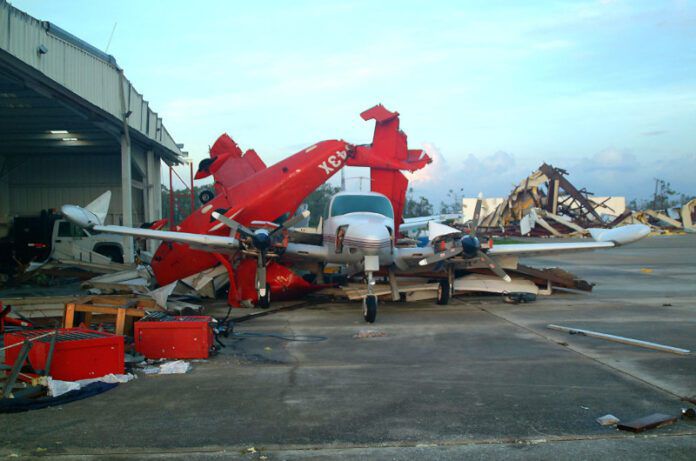 One of the many things I inherited from my father, in addition to his volcanic impatience, is a predilection for planning, especially contingency planning. Aviation, for me, has honed that obsession into a habit of preloading decision making. By that, I mean I like to think through what difficult decisions I might have to make ahead of actually having to make them. If A and B happen, then I’ll do C or D and so on. I’m hardly the only one to do this.

The preloading I’m thinking about now is the onset of hurricane season and the flowering of fly-in activity in Oshkosh next month. What ignited this is Rich Wellner’s video about losing his airplane when tiedown ropes parted in an unexpected storm. The context here is the North 40 at AirVenture and having lived in Florida for 20 years now, I’ve been through enough tense hurricane seasons to have learned a few things.

In 2004, there were four hurricanes in six weeks, starting with Charley on August 13. It came ashore at Punta Gorda, south of us, and pummeled the airport. For me, it became a real-world lesson in how to make sure your airplane survives a big storm. It’s easy. Move it out of the way or make sure your insurance is paid up. Lessor choices related to tiedown ropes, pointing it away from the wind or putting lift spoilers on the wings are the aeronautical version of a popular euphuism about the futility of rearranging deck chairs on a certain doomed ocean liner. I moved the airplane three times that summer, once to New Jersey. When I gassed up the airplane to head for Georgia, out of Charley’s path, the lineman couldn’t understand why I was fleeing. I never asked him if he saw the point after Charley swept through.

When I walked the ramp at Punta Gorda that fine sunny morning after the storm, the wreckage was evenly scattered everywhere. Airplanes that had survived in their tiedowns—and a few did—were so dented by debris damage I have to imagine they were totaled. A Tomahawk that had been double tied was almost intact, but the tail had been entirely twisted off, the empennage hanging loosely on the pavement attached by the tangle of control cables. And I wonder if the ones that did survive were repairable to the extent that anyone would really want to own them.

Hangars that had been there, maybe since the 1960s, were flattened, their steel posts sheared off at the base where they had been weakened by corrosion. I found a Cherokee in one of the hangars that seemed to have escaped too much damage, but the dazed owner of the hangar told me it wasn’t his airplane inside, but someone else’s that had been blown in from somewhere else. He pointed to his upended in a ditch near a taxiway. On the plus side, newer hangars built to modern standards—about 15 percent more steel—survived the storm, although many were dented from missile damage.

Conclusion: Move the airplane. If you can.

The Oshkosh dilemma is even grimmer. Last summer, we had a night of severe storms that was forecast to be much worse than it turned out to be, mainly lacking in high winds at Wittman Field. People were paying attention because there was quite an exodus on Wednesday. Lots of attendees who got there on Monday or Tuesday nonetheless pulled up stakes and headed to safer ground. With hail in the forecast, one of the sillier mitigations I saw was a run on carpet liner at local stores to cover wings and fuselages against boluses from heaven. I say it’s silly because the real threat is a massive, intense wind field, not hail, although both are bad.

Regardless of what tiedown efforts you think might work, you can’t defend against a microburst or, shudder, a derecho at AirVenture. For every owner that diligently plants robust tiedown stakes, a half-dozen will cast caution to the wind and use doggy augers that won’t hold back a determined Labrador. They satisfy EAA’s requirement for tiedowns, but in a serious blow, enough airplanes will probably come adrift to damage or destroy even those that are well secured.

Decision preloading is kind of a quid pro quo. If you decide to stay and ride out the storm, the probabilities are actually with you. There’s never been a serious windstorm during AirVenture. There never had been at Sun ‘n Fun either until 2011. The show got off lucky that time. Only a dozen or so airplanes damaged or destroyed.

For me, the calculus is simple. If the weather looks really threatening, you’ll know at least 12 hours before the fact. You can always bolt somewhere and come back later. The weather won’t blow the show into Lake Winnebago. Well, at least not all of it. The quid is the risk of losing or getting your airplane damaged against the quo of the value of seeing whatever the show had to offer that you’ll miss if you leave. Except you won’t miss it, because you can always come back. Quid: the hassle of packing up and moving. Quo: Not suffering the misery of filing an insurance claim and renting a car to get home or sweating out a stormy night wondering how bad it’ll get. And lately, the incidence of severe weather is on the rise, with marginally more thunderstorm days. (What data I can actually find suggests the increase is more modest than news coverage might suggest, but it’s an increase nonetheless.)

For me, it’s a no brainer. Move the airplane. Before you even get to AirVenture, have in mind a list of bolt holes so you won’t have to do it all in panic while you’re tossing gear into airplane and pulling up stakes. It will be much less traumatic if you do.

But I understand the allure of staying put. I’m as susceptible to inertia as anyone and, as I said, the probability is in your favor based on the history, at least at AirVenture. Here’s a video I did awhile ago on the performance of various tiedown systems. Here’s an earlier version and another on a new screw-type product. Aircraft Spruce has it.

As for tiedown ropes, cut the deck in your favor by carrying your own for routine use. What’s on the ramp may be old, weathered and absent half its original strength. My go-to is ¾-inch double or solid-braided nylon. Twisted nylon will do. All of these have a tensile strength of at least 10,000 pounds; more than enough for a light aircraft.

But if it really looks ugly and you know this ahead of time … well, you know the rest.