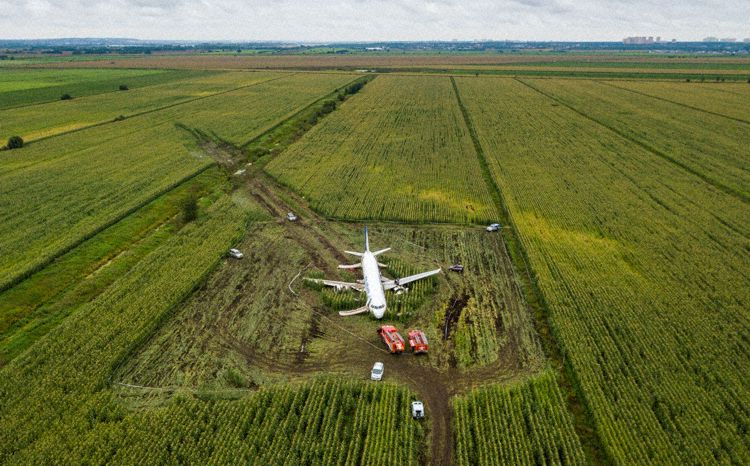 Reality is such a fungible thing in the modern world that when I first laid eyes on the photos of that Airbus A321 resting in a Russian cornfield last week, my BS alarm went off-scale high. I did a few minutes of online sleuthing before accepting that yes, this is real, and sending the link off to the news team to cover.

Why the skepticism? Timing was part of it. The flight took off from Moscow’s Zhukovsky airport at 6:15 a.m. local, which is 11:15 p.m. on the East Coast. While news cycles are 24/7/365, news that occurs in the wee hours takes longer to propagate and when I came across the initial report on a site called The Aviation Herald, not many other outlets had it.

Then there were the photos. The accident occurred at the same hour we like to pick for air-to-air shoots; the soft, golden light between dawn and 9 a.m., when a brighter sun flattens the shadows with harsh contrast. If I were going to spoof with a Photoshop job, that’s the light I would pick.

But the event was all too real and the outcome perhaps better than might have been expected. And just as USAir Flight 1549’s ditching into the Hudson River on January 15, 2009 inevitably became The Miracle on the Hudson, now Ural 178’s ersatz combine slide is the Miracle on the Ramenskoe, the district where the Airbus touched down. Less miraculous, perhaps is the dent in Russian agricultural output. “Of course,” drily observed Andrew Razin, the minister of agriculture for Moscow, “the harvest has been damaged.”

Evidently, not all miracles—at least the aviation kind—are created equal. We kept Sully-on-Hudson above the fold for days if not weeks, eventually culminating in a book and movie deal. Captain Damir Yusupov’s fame appears to be more fleeting, probably because unless it’s a 737 MAX, foreign crashes don’t hold the attention of U.S. news purveyors for much longer than it takes to write the story and push publish.

Yet Captain Yusupov’s performance—I hesitate to use the term heroics—might easily be equal to those of Chesley Sullenberger. Yusupov’s engines were snuffed by bird ingestion at 750 feet AGL, more than 2000 feet lower than USAir 1549’s loss of thrust. Given that large airliners are excellent gliders, 2000 feet is an eternity Yusupov didn’t have.

Conventional wisdom often withers in the glare of critical thought, but the part about the mind being focused by not having choices applies here. Ural 178’s pilots probably lacked the time to even consider that favorite hangar-flying argument: straight ahead or turn back. The only choice was gear-up or gear-down and which cornstalk to aim for.

That sounds like a no-brainer to me. Landing with the gear down risks it digging into soft earth and opening up the fuel tanks, almost guaranteeing a fire in an aircraft with a lot of fuel onboard. As it did in USAir’s ditching, the hull remained intact enough to contain the fuel and allow all the cabin doors to be opened for a quick evacuation. There were some injuries, but none were serious.

The Franciscan nuns of my misspent Catholic youth failed to convince me of a discernible difference between miracles, mass hysteria and dumb luck. And that was before Photoshop was even invented. Luck plays a part in survivable airplane crashes and it certainly did here. If Captain Yusupov’s windshield had been filled with gray, Soviet-era apartment blocks instead of a cornfield, we would be writing a different story. But as with Sully, luck didn’t manage the airspeed and time the flare over 8-foot corn, both tasks outside the usual sim training modules. Skill did that.

But let’s give Photoshop its due. Within 48 hours of the accident and circulating at the speed of the Internets, the image at left appeared as a master class in inside-baseball spoofery. Look closely and it’s a spring-loaded switch guard over a mode selection perfectly labeled Corn Field.

Even Sister Salisha might have to rank that kind of human attainment as near miraculous.