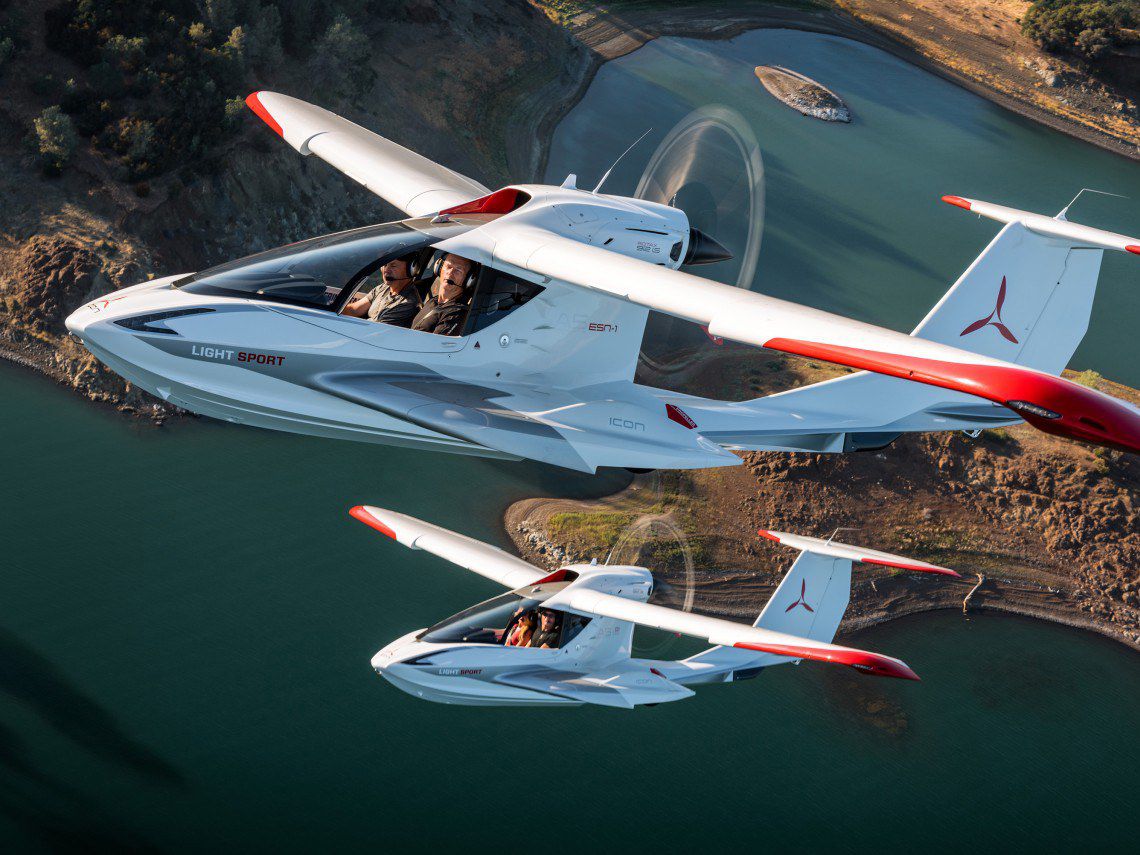 Is Icon going to make it? As someone responsible for covering such things and presumably offering an opinion supported by disclosed fact, I’m not asked this question so much as I am informed by the aviation cognoscenti that no, it will not. I’ve spent quite a few hours during the last month or two writing about the subject and editing this week’s video.

The negative opinions seem to diverge into two camps, the first occupied by pilots who hated the very idea Icon was trying to advance and the second unconvinced that Icon can overcome the daunting economics it has erected for itself in the midst of what is undeniably a lackluster aircraft market. That applies equally to certified and ASTM segments, with the possible exception of Cirrus, but even it is nowhere near the lofty heights of the 2007 sales peak.

First the airplane. As LSAs go and as I mentioned in the video, the A5 shows evidence of the uncommonly large amount of money spent to birth it. It has appealing, angular good looks, the interior and panel—which I was prepared to hate—is well detailed with attention to fit and finish and it’s not festooned with gadgetry. I’m not sure how the wing fold mechanism will hold up over time, but its execution is competent and well-suited to the stated purpose. Just watching someone unlimber one of these things on a ramp ought to attract a small crowd.

Well mannered and docile, it’s fun as hell to fly, especially with the removable windows left back in the hangar. Other aviation journalists have blathered on about the unique angle-of-attack indicator and I agree that Icon’s iteration of this much overblown instrument and its integration into the training is an innovation worthy of praise. Other manufacturers would do well to note the possibilities.

If I have any druthers for the A5 it would be for more power. The A5’s gross weight is waivered to 1510 pounds to accommodate the heavier stall resistant wing and a ballistic parachute. The safety tradeoff is admirable, but lunches still aren’t free, especially in aerodynamics. The A5 is leisurely off the water compared to other amphibs and float LSAs that cost a lot less. Part of Icon’s marketing plan was to appeal to well-heeled motor sports enthusiasts. Except for the well-heeled part, I inhabit the two-wheeled galaxy in that universe and for me, the sport part isn’t so styling around on a cruiser as it is something that’s just stupidly overpowered that the government hasn’t found out about yet. Or at least knows I have. So in my fantasy world, the A5 would have 150 HP and a CS prop. Now we’re talking. The rules just need to catch up with the market, a perennial mismatch.

I’ll concede more power might not sweeten the sales appeal for many. I live in my own distorted little world so just leave me alone. So what would expand the appeal? Scream, scream, we all scream that a lower price would. Frankly, I’m not so sure of that. Even the lowest priced LSAs aren’t selling large volumes. But it’s undeniably true that even if you’re selling into what you imagine to be a virgin market, if the competition is half (or less) your price, the sales pitch will have to be one for the ages.

If Icon made a potentially fatal mistake, they’re just repeating the same one about every other airplane manufacturer has made: overestimating demand and underestimating production economics. In my interview with Icon president Thomas Wieners, he said the A5 wasn’t necessarily designed for manufacture. There are degrees of this and more than one company—including Cirrus—had to hustle to eke out build efficiency after the orders started pouring in.

And Cirrus was lucky enough to survive long enough to have the opportunity to do that. That works continues yet to today. Airplane buyers gauzily imagine that gains in build efficiency will allow lower prices, but it doesn’t work that way. Whacking build hours just keeps the margins in place against costs that seem to go only in one direction: higher.

Recall our reporting on the Vashon Ranger which is undeniably designed for manufacture. It has an attractive price and qualifies as a great airplane. But it’s also not flying off the shelves, exactly. With a composite main structure and a lot of separate parts and pieces, Icon faces a real challenge in reducing build time. If the investors hang in—and let’s be honest, that will determine Icon’s survival as much as anything the buyers do—the company can chip away at the problem. Wieners has a manufacturing background and he thinks gains can be made.

Assuming Icon can find buyers, training may be a like challenge. As I mentioned in the video, we know of at least six accidents before 100 airframes were in the field. While it’s too early to have this define the A5, Icon will have to pay attention to the possibility of a continuing trend. All of the accidents thus far have involved not newbies, but relatively experienced pilots. The company hopes to be training new pilots in what can be the riskiest kind of flying; zooming around obstacles and terrain at low altitude and dealing with glassy water, sea state and winds that can be hard to read. This kind of flying requires fine-point judgment and experience is the best teacher.

Then there’s the survival instinct factor, which sometimes eludes … me. Reader Michael Robbins noted that in the video, neither of us is wearing a PFD. His observation shocked me because this is a piece of equipment I always use when float flying. Yet I didn’t have it this time. I have no explanation, but I know I didn’t even think of it, which is hardly an exemplar of basic survival instinct. Maybe I was distracted by fooling with the cameras. On long overwater flights, I always wear the PFD. In a seaplane, you’re not just over the water, you’re on it. And in a heartbeat, you can be in it, bleeding with something broken. So wear the PFD and if you see me not doing it, drown me.

So to the question of whether Icon will survive, I have no answer. But I do have a wish and that’s that they do. The A5 is a terrific airplane and the company’s idea to bring in new pilots from outside the usual aviation channels is innovation worth encouraging. Here’s hoping they can get the numbers right and make it work, however difficult that may be.