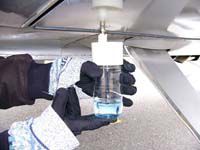 A new report published by the National Academies of Sciences, Engineering, and Medicine Transportation Research Board says multiple mitigation strategies are necessary to reduce lead emissions from piston aircraft. The study, “Options for Reducing Lead Emissions from Piston-Engine Aircraft,” was conducted by a ten-person committee in response to a congressional request laid out in the FAA Reauthorization Act of 2018. The committee’s stated goals were to assess existing non-leaded fuel alternatives to aviation gasoline, ambient lead concentrations at and around GA airports and mitigation measures to reduce those ambient lead concentrations.

Noting that “lead exposure can result in an array of negative health effects in humans,” the committee’s recommendations for near-term mitigation efforts included having the FAA establish a partnership with GA organizations to create an ongoing education, training and awareness campaign on avgas lead exposure. In addition, it asked the agency to update its guidance on runup area placement and called for an exploration of policy options for motivating the production and supply of 100VLL (very low lead) and encouraging greater use of available unleaded avgas options “by the portion of the piston-engine fleet that can safely use it.” The committee also recommended that work continue on finding a universal unleaded replacement fuel for 100LL via the Piston Aviation Fuels Initiative (PAFI) or an alternate evaluation process, but acknowledged that a universal replacement fuel could prove difficult to develop.

“Without leaded avgas, tens of thousands of piston-engine aircraft, used for a wide range of beneficial GA purposes, could not be safely flown,” the committee said in its report. “Decades of research on octane-enhancing additives have failed to find an alternative to lead that performs in an operationally safe manner for all GA aircraft in use today. Hence, eliminating lead from avgas is a highly desirable public health goal, but one that has been difficult to achieve.”

For longer-term mitigation strategies, the committee suggested that all newly certified gasoline-powered aircraft be approved to operate using at least one ASTM-specified unleaded fuel after a set date. It also called for initiatives aimed at promoting the development, testing and certification of lead-free propulsion systems for GA aircraft along with the associated airport refueling and recharging infrastructure.

The complete report can be downloaded for free from the Transportation Research Board’s website at http://www.trb.org/Main/Blurbs/181701.aspx.