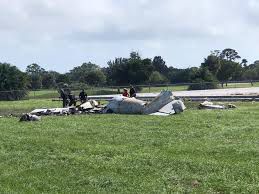 A Vietnam War-era OV-1 Mohawk crashed a Florida airshow on Friday, killing the pilot, who was the only person on board. The Audi Stuart Air Show identified Dr. Joseph Masessa as the pilot and owner of the twin-engine turboprop observation and attack aircraft. It’s the second warbird crash in a month since the loss of the Collings Foundation B-17 in Connecticut in early October. The accident happened on the field during practice for the show at Witham Field in Stuart, Florida, about 1:15 p.m. Video showed the plane diving almost vertically into the infield. Emergency personnel were on the scene within seconds but there was nothing that could be done to save Masessa, said local officials.

Masessa billed his act as the only one of its kind on the airshow circuit and featured simulated low-level attack runs along with light aerobatics. The show was canceled on Friday and bad weather also forced cancellation of the Sunday show. “We ask that you please be patient as we process and mourn the loss of Dr. Joseph Masessa, who was very close to our air show family,” show officials said in a post on their website.