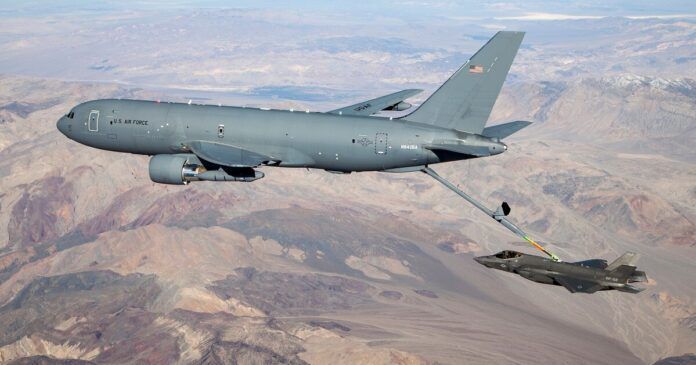 The Air Force is considering cutting potential crew casualties by eliminating copilots on KC-46 Pegasus tankers on high-risk missions during war. The Air Force Times is reporting top brass are concerned the big tankers will be sitting ducks for Chinese anti-aircraft missiles in an Indo-Pacific conflict. “Shrinking the number of airmen onboard a tanker could help minimize potential troop casualties while still getting combat jets the fuel they need,” the publication reported. The Air Force has confirmed it’s an idea being considered but no decision has been made.

“The command is currently reassessing minimum flight crew requirements as we explore and validate new tactics, techniques and procedures oriented towards a dynamic, future fight,” Air Mobility Command spokesperson Maj. Hope Cronin told Air Force Times. Eliminating the copilot would leave just the pilot and boom operator on the dicey missions, and the publication says the Air Force isn’t even sure two people can handle the airplane. Cronin told the Air Force Times some kind of waiver would be needed for crews before they can even test the concept.

Some KC-46 pilots aren’t happy with the idea. The Air Force Times reported that social media sites frequented by the pilots erupted with negative comments. Some speculated the idea was borne of a chronic pilot shortage at McConnell Air Force Base (which the Air Force denies) while others said the proposal is hazardous. “This isn’t funny anymore. If true this is gonna get someone killed,” one Instagram poster said.