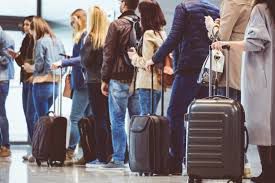 Acting FAA Administrator Billy Nolen said Tuesday that on-time performance by U.S. airlines has improved and cancellations are down substantially. “We are keeping our eye on things. We’ve seen good improvements,” Nolen told two reporters at the Farnborough Airshow. “We can see overall delays are down… The airlines are working to right size their network.” Reuters quoted him as saying. Nolen also rejected claims by the airlines that short staffing at ATC facilities was behind the snarled schedules a couple of weeks ago.

Nolen said most of the issues “are not in any way shape or form related to air traffic (staffing) shortages.” Nevertheless, he took the opportunity to brag about the agency’s latest recruitment efforts. “We are on track to hire 1,000 controllers this year,” Nolen said. In a recent recruiting call, the agency attracted 57,956 applications he said. Nolen also said Jacksonville Center will get more staff. JAX has been singled out by airline CEOs as a bottleneck in the system because of staffing shortages.