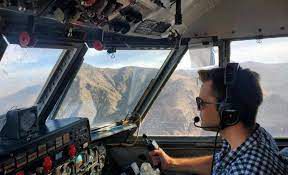 The death of a young copilot who fell from a jump plane in North Carolina last July was an accident, an autopsy report has ruled. The report, obtained by NBC News, says Charles Hew Crooks, 23, died from injuries resulting from his fall to a backyard in a suburb of Raleigh on July 29 and deemed the tumble accidental. He wasn’t sick and didn’t have any “drugs of abuse” in his system. It suggests Crooks was trying to get a breath of air when he went out the open cargo ramp at the back of the CASA 212.

The NTSB preliminary report quoted the pilot, who has not been identified, as saying Crooks was “visibly upset” after the landing gear was damaged in a landing attempt at a private field about 100 miles from Raleigh earlier that day. The pilots opted to head for Raleigh for an emergency landing. The autopsy report says that on the way to Raleigh Crooks told the pilot he wasn’t feeling well after the plane hit moderate turbulence. After first opening a side window for air “and possibly to vomit,” the report says Crooks got up and headed to the back where the ramp had been opened for ventilation. “At some point, the pilot realized that he had apparently fallen from the aircraft,” the report says.