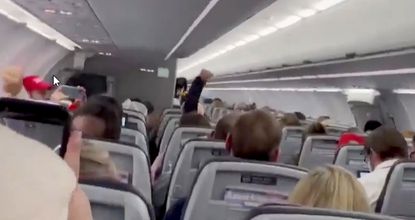 Flight attendants are applauding a new zero-tolerance stance by the FAA for bad behavior by passengers. The agency has announced that misbehaving passengers will no longer get a warning before they face significant punishment. The action, which is in force until the end of March, stems from a rash of airborne confrontations between unruly passengers and cabin crew, some of them involving participants in the Jan. 6 political rally in Washington, D.C. In a statement, the FAA said the policy will also apply to incidents of “politically motivated harassment” in airports like that experienced by several members of Congress in the last week. Fines of up to $35,000 and jail terms can be levied against violators.

“First strike and you’re out,” said Sara Nelson, president of the Association of Flight Attendants. “We applaud FAA Administrator (Steve) Dickson for taking this clear stand for our safety and security.” Flight attendants dealt with numerous incidents of bad behavior in the days before and after Jan. 6, notably the refusal by some passengers to wear masks and the harassment of other passengers for their political beliefs. The FBI is worried about an escalation in anti-government violence surrounding the inauguration of Joe Biden and Kamala Harris on Wednesday