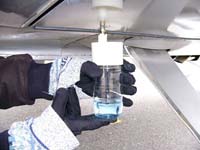 As a former FBO operator, airport manager, current E series powered Bonanza owner, A&P, drag racer, biker, and lover of all kinds of high-performance vehicles, myths die hard. Local dirt track racers would come over to the airport on Friday and Saturday night to buy 5 gallons or so of 100LL avgas. No amount of science information demonstrating the ill effects of running avgas in high performance/high compression circle track cars would convince them to do otherwise. Unleaded racing fuel was widely and easily available in that area. However, in spite of all the evidence, they were convinced they got better performance from avgas because of the lead and the sweet smell similar to auto race fuel. In other words, a placebo affect based on pure myth.

Likewise, talk to ten different A&P’s, and you will get ten different opinions on the long-term damaging effects of running auto fuel, or mogas (the aviation version of auto fuel). No matter what the scientific evidence presents, each one is sure, he/she (maintaining my PCness) can identify the damaging effects of continued use of non-ethanol auto fuel/mogas. Usually within the diatribe that follows, the A&P cannot get too specific about what those damaging effects really are, but he/she is sure it is not good. I believe this is one of the primary reasons, most aircraft owners pay the extra money for avgas, convinced they are providing far better longevity and performance (just like the local circle track racers) because the myth that lead in any kind of fuel makes it “more powerful” and is “good for the valves”.

My E-225-8 was certified for 80/87. I have been running 91 octane non-ethanol auto fuel from my local Walmart, Phillips 66, and a locally owned gas station. I check each batch of gas for ethanol. Then I filter it as I pour it into the Bonanza. I did likewise on our former 0-300 powered 172.

After 10 years of using locally obtained non-ethanol auto fuel, I have never found a trace of ethanol. The fuel has always been clean, free of contamination. Since I try to fly regularly, I have no aging fuel problems, phase separation, or diminished performance. My airplane has the hand operated wobble pump which make hot starting the pressure carb E series engine a three handed, somewhat comical affair. But with auto fuel it starts much easier on a 100-degree day a few minutes after massive heat soak. Likewise, in winter in initial cold start. I am addicted to the sweet smell of racing fuel and 100LL. Auto fuel stinks. But I have never changed a plug in either airplane. Never fouled a plug in either airplane, with far cleaner oil between oil changes. Sticking valves/”morning sickness” is gone, valve guide wear virtually nil, clean oil after 50 hours of use (have spin on oil filters instead of the screen), lower oil consumption, between 8-10% better fuel economy, and on average $2-3 dollars per gallon less fuel costs.

All of the above is a great cost benefit, performance improvement, less maintenance, and increase cylinder longevity, for me to fall for the sweet smell addiction or the arguments ten A&P’s will give in favor of 100LL. Like all of us auto fuel aficionados, I have to add 100LL on many cross countries. But I still flight plan giving priority to FBO’s who offer mogas even if it adds some addition distance to the flight. But the majority of the time I fly, I have pure auto fuel in the tanks.

For the California, Illinois, and many eastern coast state-based aviators, I can easily surmise the political climate by the availability or lack of availability of non-ethanol auto fuel. I feel your pain.

For me, it is worth the effort to use non-ethanol auto fuel, because I like flying a 9.7 GPH at $2-2.50 per gallon, at 150-155kts true. This is a significant reason why I can still own, maintain, and fly an airplane in 2021. I would be flying considerably less at $4-7 dollars per gallon. Plus, I feel good about my airplane not adding to the miniscule amount of lead the current fleet of piston pounders are adding to the atmosphere. I like being a good steward of the planet.

Swift Fuels has done an extraordinary job bringing their non-leaded, certified fuel to the aviation market. But they suffer the same uphill battle against 75 years of lead use with the mythical conception that aircraft engines cannot be safely adapted to non-ethanol auto or mogas that continues to permeate a large portion of aircraft owners and operators. I hope the average aircraft owner supports them when possible. I do when I can.

Urban myths combined with political pressure and normal grandstanding, powered by all sorts of lobbying, adding the normal, glacial FAA decision-making is just a few reasons why 100LL will be here but debated periodically for a long time. If 100LL is environmentally swept away, anybody with an auto fuel STC aircraft will see their aircraft value rise. New aircraft sales will plummet adding more value to the old Bo. My airplane’s future is more secure than a new SR-22.

As I’ve mentioned before, I find descriptive announcements like “Blue and white Cessna” useless since it’s almost impossible to discern color unless you’re almost on top of the other aircraft. Maybe an all-yellow Cub or some other highly distinctive color, but not the typical “X and white” aircraft. Besides that, with many aircraft having ADS-B out, hearing the last 2 or 3 digits of the N-number helps me locate the aircraft on my traffic page, which then helps me better visually locate the aircraft out the window; are they on a tight downwind or a B52 wide downwind, for example.

As for straight-ins, I’ve used them before. If I’m coming in from a direction that is aligned with a straight-in and there isn’t a lot of traffic, I don’t see any problem with it. Same thing when practicing an instrument approach, and if it looks like there will be a conflict, I’ll do a 360 or break off the approach and try again. And sometimes a straight-in might actually be the safest entry if the pattern is full of aircraft at different distances from the runway on the various legs of the pattern and there is a gap to safely enter on a straight-in. Sometimes flexibility is the key to safety.

Poll: Is the NTSB Right to Suggest More Scrutiny of CFIs?