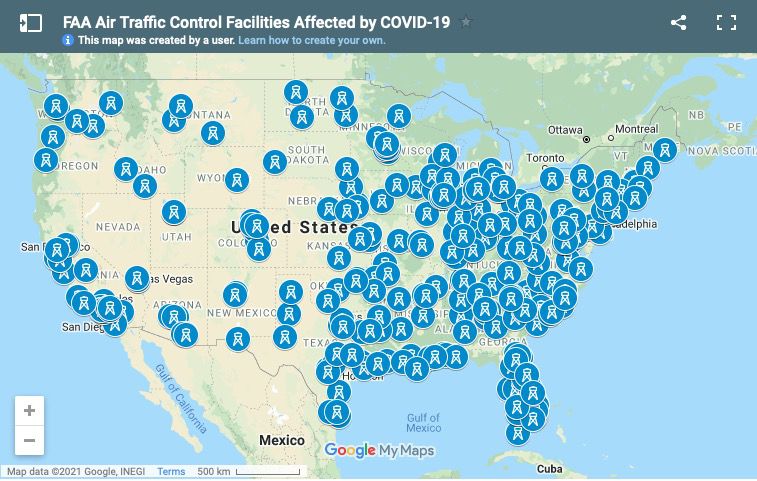 The FAA has issued a safety notice telling pilots something many have already found out the hard way. It’s warning that air traffic control facilities can suddenly close for cleaning after the discovery of COVID-19 infection in staff members. In some cases that means crews have to fend for themselves in maintaining separation in some of the country’s busiest airspace. Airports in the L.A. Basin experienced a series of shutdowns over the recent holiday period and last Wednesday the Jacksonville TRACON was closed for most of the evening push when a staff member’s positive test became known. The sudden closure was announced in a tweet. In that case all northbound traffic transiting the zone between about 4:20 p.m. and 7 p.m. had to line up single file at the same altitude along the Atlantic coast until Atlanta could take over and all southbound traffic went down the Gulf coast to South Florida airspace.

The normal pre-departure NOTAM check might not turn up any signs of the trouble that lies ahead because “NOTAMs for ATC Zero can pop up quickly.” The agency maintains a map of all the facilities that have had COVID-19 closures and just about every facility in the country seems to have a pin on it. So it’s advising pilots, particularly those who fly almost exclusively IFR, to brush up on non-towered procedures in case they unexpectedly have to put their heads on a swivel at their destination. Central to that is knowing and switching to the Common Traffic Advisory Frequency to announce their existence and what they hope to do. “If you cannot adequately determine the flow of traffic and your position in the flow, do not hesitate to hold a safe distance from the airport until your situation is clear to you,” the alert said. ‘You can always fly to an alternate until things settle down at your destination.”