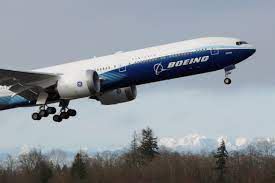 The FAA has told Boeing not to expect certification of the 777X until possibly the end of 2023, citing numerous design and test issues including an “uncommanded pitch event” last December. The Seattle Times got to read a letter sent to Boeing on May 13 in which the local FAA manager Ian Won said there is a lot of work to do before he signs off on it. “The aircraft is not yet ready,” the Times quoted Won as writing. “The technical data required for type certification has not reached a point where it appears the aircraft type design is mature and can be expected to meet the applicable regulations.”

The Times didn’t report any details of the pitch control issue but did quote the letter as saying that Boeing hasn’t satisfied the FAA that it knows what happened and has fixed it. The FAA is also worried about an unspecified avionics system proposed for the airplane and about software and hardware modifications planned for the flight control system. The 777X is the biggest twin Boeing has built and the largest version will seat more than 400 passengers, depending on configuration.