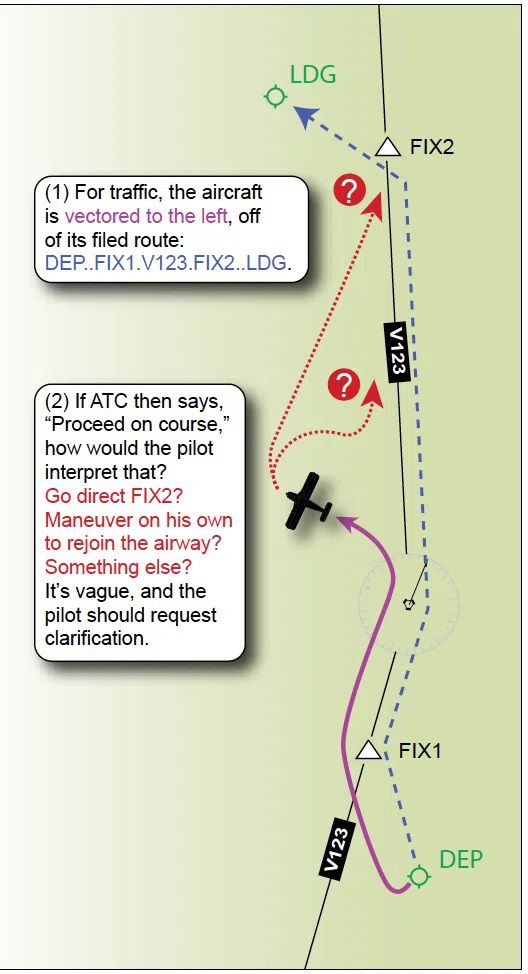 Believe it or not, air traffic controllers don’t issue radar vectors for amusement. I know it might seem like it when you’re getting strung out for a sequence or for traffic, watching the time-equals-money clock ticking away, increasing the costs of your flight.

My goal as a controller is to get you on your own navigation as soon as possible— the less I vector you, the less work I have to do. The obstacle to turning you loose is that there might be traffic conflicts that require me to comply with internal traffic-flow procedures.

Once we get to that point, though, how do I tell you you’re on your own? Due to the number of possible scenarios, there are several ways.

Let’s first talk about some loose language that’s in common use. Official phraseology exists to keep things standard and clear. That hasn’t stopped one easily misinterpreted phrase from seeping into the lexicon: “Proceed on course.” Those three little words open up a world of possible outcomes, and, in air traffic, that’s not a good thing!

“Proceed on course” is often uttered when ATC is cancelling a vector and allowing an airplane to navigate on its own. I’ve seen it used with both VFR and IFR aircraft. I somehow picked it up early— probably from one of my peers—and used it for years, unaware I was propagating uncertainty. When I transferred to a new facility, though, and used it there, my trainers quickly corrected me.

Why? Well, “proceed on course” doesn’t exist as actual phraseology in the ATC rulebook—FAA Order 7110.65— except for one mention in section 9-2-11 related specifically to aircraft being authorized to operate in the Washington D.C. Special Flight Rules Area. That’s it. And it’s nowhere in the AIM and the Pilot/Controller Glossary. It just sounds official, but lacks official definition.

Something undefined is therefore ambiguous. Imagine you’re IFR, flying your filed route, which is KDEP…FIX1. V123.FIX2…KLDG. Halfway between FIX1 and FIX2 on V123, ATC vectors you to the left for traffic. Afterwards, ATC tells you, “Proceed on course.” At this point the airway is now five miles off your right. What do you do?

In researching this article, I scoured a few aviation forums, to see how different pilots interpreted this situation. Some said they would fly directly to FIX2. Some said they’d make a 90 degree right turn to rejoin the airway. Some said they’d do a shallow angle to intercept the airway. The point is: while the intent is easily understood—“You’re on your own navigation now”—the actual execution is totally up to interpretation. When trying to keep airplanes safely and legally apart, there can be no room for vagaries.

There are quite a few controllers who still use “proceed on course.” I’ll be honest: once in a while I let one slip out myself. Old habits and all that… With all this in mind, if you do get told to “proceed on course,” consider 91.123: “Compliance with ATC clearances and instructions. (a) When an ATC clearance has been obtained, no pilot in command may deviate from that clearance unless an amended clearance is obtained. … When a pilot is uncertain of an ATC clearance, that pilot shall immediately request clarification from ATC.” If you’re unsure, ask the controller.

We’ve covered the wrong way to get cut loose from a vector. Fortunately, there are a few proper methods. Let’s start with IFR aircraft.

Using the previous example, the controller could tell you, “Proceed direct FIX2. Resume own navigation.” That’s as simple as it gets. Go direct from your current position to the assigned fix, and resume your cleared flight plan from there. There’s little else to say about it.

Another option available would be to rejoin the airway. “Fly heading 020, join Victor 123 northbound. Resume own navigation.” ATC is giving you a heading to intercept the airway on your route. You would rejoin V123, and continue on your cleared route.

What if you were on a Standard Instrument Departure (SID) or Standard Terminal Arrival (STAR) and ATC vectored you off for traffic? Just to vector you off such a procedure involves extra phraseology and may include altitude instructions along with the heading, since SIDs and STARs are often complex routes involving multiple altitudes and waypoints.

In the 7110.65’s vectoring chapter, 5-6-2 d. says, “When vectoring or approving an aircraft to deviate off of a procedure that includes published altitude or speed restrictions, advise the pilot if you intend on clearing the aircraft to resume the procedure.” The phraseology would be: “Fly heading [degrees]. Maintain [altitude]. Expect to resume [name of SID, STAR] at [NAVAID, fix, waypoint].” The last part—where to resume it—may be omitted if we’re not sure of the intercept point yet.

Well, you flew IFR up from KDEP to KLDG and landed. (See what I did there? DEParting? LanDinG? Sigh. I know. Terrible.) Now it’s time to head back to KDEP.

The weather is beautiful and there’s a meandering river between the two cities. You decide to fly back VFR, so you can enjoy the boats, nature, quaint towns, and other sights. If you see anything special, maybe you’ll drop lower for a look-see. You still request flight following for ATC traffic advisories.

When you’re 25 miles from KDEP, ATC tells you, “Turn left heading 090. Vector for traffic. Traffic, 2 o’clock….” You turn as instructed, and a minute later report the traffic in sight. How will the controller get you back on your way?

When generating a squawk for VFR aircraft, ATC typically only enters a departure and destination in the system. No route. How you get there is wholly up to you, barring ATC instructions or airspace considerations. You could have done 360s over a pretty town square, or followed a boat towing a water skier. You were under your own navigation. And that’s exactly what ATC likely will tell you: “Resume own navigation.” You can go about maneuvering however you wish on your way towards KDEP.

What if, rather than “resume own navigation,” ATC said, “Proceed direct KDEP”? Freeform sightseeing time is over. As with IFR aircraft, that means make a straight line to the assigned fix.

This is often used in conjunction with airspace restrictions and traffic. For instance, if I know the river runs right by my main airliner airport, I can’t let you fly its whole length. I need to protect for my arrivals and departures. Instead, I might tell you to proceed direct KDEP from your current position, which I’ve gauged will keep you a safe 10 miles away from the hot zone.

Many times I’ve told VFR aircraft, “Proceed direct [fix],” only to see them continue meandering about. They interpret it as route discretion. No, direct means straight line, now. If you don’t know the heading, ask for a vector, such as, “Request vector direct KDEP.” That puts everyone on the same page.

Lastly, let’s touch some on the vertical dimension here. Okay, you’re following the river. To tunnel you underneath crossing traffic, ATC issued you, “Maintain VFR at or below 3000.”

Later on, you got that turn to 090 to dodge traffic. Afterwards, ATC said, “Resume own navigation.” As we’ve discussed, that allows you to maneuver on your own. A question, though: Does that also release your altitude restriction?

In a word, no. Lateral and vertical navigation are two separate things. Until ATC specifically addresses the altitude restriction, you must still comply with it. I can’t tell you how many pilots that I’ve instructed to “resume own navigation” suddenly start climbing or descending through an altitude restriction. If you didn’t know before now, that’s a pilot deviation.

To fully cut away the altitude restriction, the correct phraseology is, “Altitude your discretion.” This is often paired with or reinforced with “Maintain VFR” to emphasize your responsibility for cloud, traffic, and terrain clearance.

Whether ATC is cutting loose the restrictions or piling more on, be aware of how much leeway you’re being given. Don’t hesitate to ask for clarification or more time if needed.

Not In The Know

The number of controllers who are current pilots is a distinct minority. Sure, some of us have some flight background, and the FAA encourages controllers to take familiarization flights to experience the pilot side. Still, a significant number have never even cracked open a copy of Microsoft Flight Simulator, much less sat down at the controls of an actual airplane.

Therefore, when a controller issues an instruction, it’s unlikely he knows what’s involved in carrying it out. Executing “Proceed direct FIX2” means very different things in a Cessna 172 versus an Airbus A320. We don’t know how many knob twists, key strokes, iPad finger swipes, or other actions must occur, and how fast you can carry them out based on your workload or experience.

In AIM 5−5−6, Radar Vectors, it lists the following pilot responsibility: “Promptly complies with headings and altitudes assigned to you by the controller.” The first word is key: promptly. When you read back the instruction, ATC is expecting you to get it dialed in and start turning pretty much right away.

In reality, that may not actually happen. I recall on one VFR sightseeing flight, I was using some new navigation app on my phone. I decided to alter my route, and realized I’d never actually used the “Direct to…” function in the app. It took me a few frustrating minutes to figure it out. I was well annoyed at the end … and that was without the pressure of ATC asking, “Why aren’t ya turnin’?”

Stuff happens. iPads reboot or fall between the seats. Inexperience with the avionics or software can leave you scratching your head. Weather conditions or an uncomfortable passenger may leave you with an already-full workload.

If you think it’s going to be a little bit before you can fully execute the instruction, think of AIM 5-5-2’s section on pilot responsibilities. “4. Promptly complies with an air traffic clearance upon receipt except as necessary to cope with an emergency. Advises ATC as soon as possible and obtains an amended clearance, if deviation is necessary.”

A dropped iPad stuck between the seats, for instance, may not be an emergency, but it’s certainly a hindrance and distraction. Just ask for a vector. ATC doesn’t need to know all the details unless it’s something critical. “It’ll be a minute before I can get it dialed in. Request a vector towards FIX2.” If I was working you, I’d say, “Fly heading 020. When able, proceed direct FIX2 and advise. Advise if you require any assistance.” Now you’re aimed correctly, and can sort out in-cockpit issues under less pressure. If you need help, please speak up, so ATC can give you extra attention.