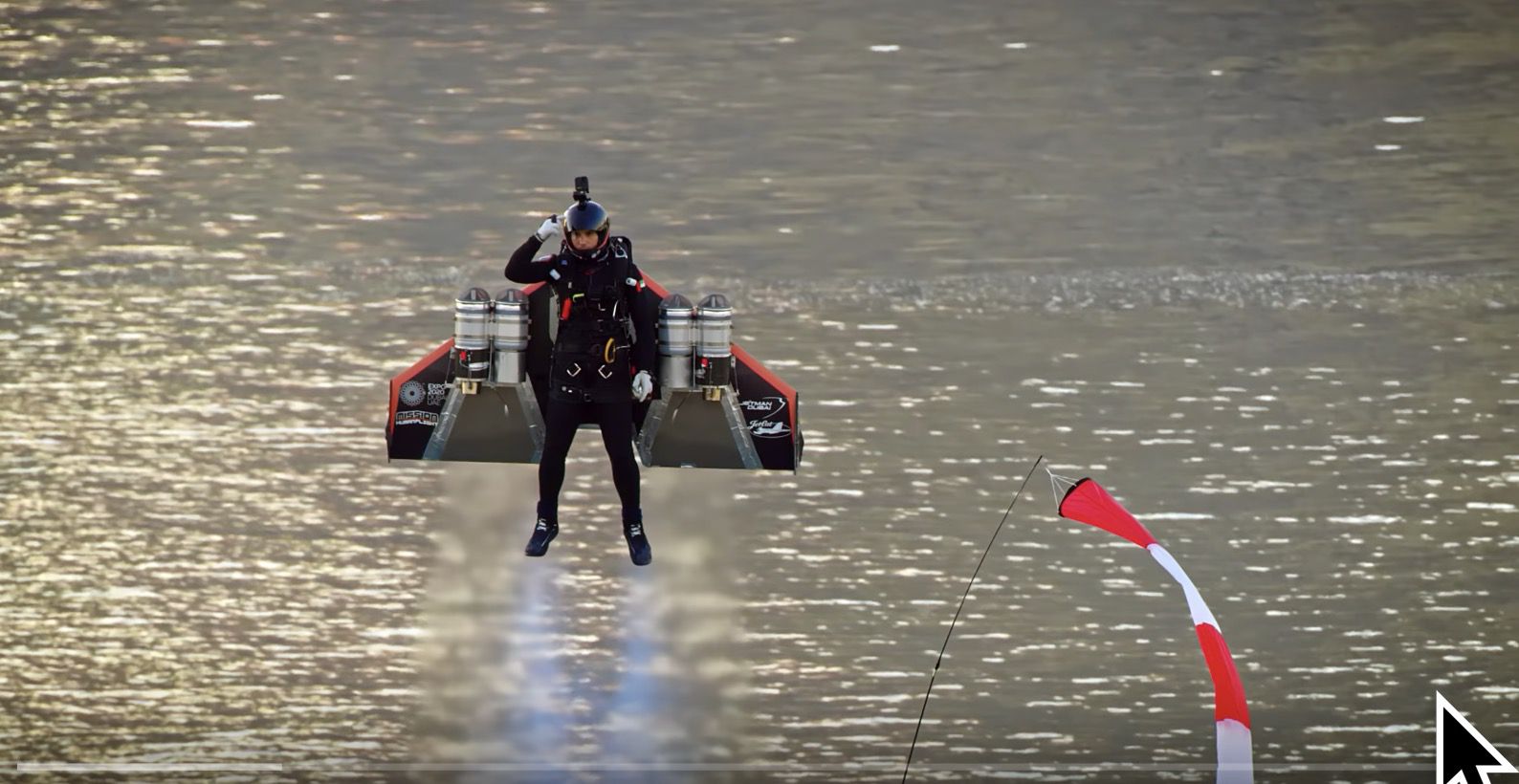 If YouTube and Instagram had existed when Wilbur and Orville slipped the surly bonds in Kitty Hawk, the whole thing would have pixeled by as just a brightly colored Koi in the overwhelming river of digital content that numbs the senses. You’d have been wondering … this isn’t new, right? I’m just seeing it now, right?

That’s the reaction I had when I saw this footage of Vince Reffet—aka the Dubai Jetman—lifting off from a pier on the Dubai waterfront. Given that most of us are slap silly from smartphone overstimulation and the inescapability of social media, we might lack the contemplative mental bandwidth to appreciate what’s going on here. It’s history in the making in the arc of what we in skydiving sometimes call human body flight. Or, put another way, if being in an airplane is flying, riding in a boat is swimming.

What Reffet pulled off is human flight about as pure as it can get if purity is defined as being birdlike. And if a bird can climb 2000 FPM. In this video, jetpack pioneer Yves Rossi briefly describes a maneuver in skydiving called tracking. We all do it at the end of every jump to put some airspace around us to open canopies safely. The body position is arms and legs back in a tight delta. For those 10 seconds, you can look down from 4000 feet and see the landscape scroll slowly by. Flying can be imagined, but the houses are getting rapidly bigger so it’s really less than a glide, but more than an Acme anvil kicked out of the airplane.

But Reffet’s flight was something else entirely. It marked the first time either he, or his mentor, Rossi, launched from flat ground, not an airplane or a platform. He hovered, turned, circled back and landed. Another first. (Success two flights all from pier. Zoomed over city. Inform press. Home Easter.)

I can’t find much technical detail on the wing pack, but if it hews to Rossi’s original design, it has no aerodynamic controls at all; no ailerons or elevator, no flaps, no rudder. It’s a lifting body with undiluted thrust from four 50-pound engines vectored entirely by weight shift and body position. If it has been improved, they’re not talking much about it. Look at Reffet’s hover, turn and landing. The movements are so subtle as to be undetectable. It looks like he has something in his hand, but on takeoff from the helmet-mounted camera, his hands look empty. In previous interviews, Rossi says he has a finger-mounted throttle control. I suspect Reffet has the same. As if the hover and landing weren’t gobsmacking enough, Reffet turned, angled up and zoomed out over the skyline. You can almost see the thrust, weight and lift vector equations in motion, but what I see is the glorious wonderment of why I’m not on a flight to Dubai to buy one of these things and enroll in flight school.

So where’s this interesting milestone in flight going to go? Will it be just a minor footnote; a niche curiosity for a few people gutsy enough to try it? This is the world’s top skydiving team and they are on top by a margin so wide as to be a chasm to the second place team. Thirty years ago, this level of performance couldn’t be imagined. When skysurfing was a thing 20 years ago, some people thought it would remain a thing. It didn’t. When wing suits appeared a decade ago, some people thought it was a passing fad. It wasn’t. Having learned skills we couldn’t conceive–subtle body positions that deflect air and shift a lift vector you can actually feel— wing suiters now fly formations of up to 100 or more people. Although they lack the ability to sustain climb, wing suit pilots can swoop and roll like a neophyte bird, but a bird nonetheless.

And anyway, if birds had somewhere to put the fuel, they’d have jet engines, too.