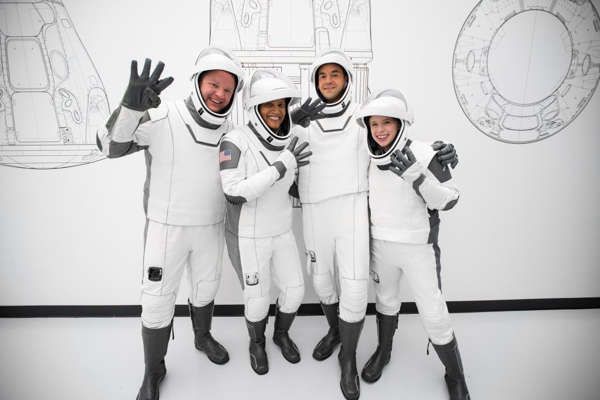 Yeah, geez, I’m trying to get inspired here by Inspiration4, SpaceX’s latest launch. Call me crazy, or jaded or just thick as a mud fence, but it’s not coming. Maybe someone can help me peel the clouded scales from my eyes. Maybe it’s those cheap looking Sci-Fi space suits or maybe I was expecting to swoon over the sheer audacity of it. But I got nothin’.

Having lanced that carbuncle, the thing I am most impressed with is that we won’t have to argue about whether the four-person crew are astronauts, given that they’ll spend three and half days orbiting almost 300 miles above the Karman line. The working press is calling them “amateur astronauts” but the term I like better is tournauts. And they really are tourists. The “science” they’re doing sounds to me like growing second heads on flatworms or watching spiders weave webs in space, both of which have been done on the ISS. Frankly, if it was me, I’d just keep my nose pasted to the windows and to hell with explaining the justification.

By the way, the flight is also doing the rather admirable earthly task of raising money for St. Jude Hospital. Indeed, one of the crew members is a St. Jude cancer survivor, 29-year-old Hayley Arceneaux, and Christopher Sembroski, 42, won his seat in a St. Jude raffle.

There are other things to be impressed by, actually. In fact, the single biggest thing may be the billionaire financing this ride: Jared Isaacman. He’s not in the mega billion class with Elon Musk or Jeff Bezos and even trails Richard Branson by a little, but he’s every bit as precocious, according to this Forbes profile. He dropped out of high school to seize business opportunities he would have otherwise not had time for. His major wealth is rather recent, when he took Shift4, a payment processing service, public. You may know the name Draken International. It provides multimillion-dollar training contracts—including tactical aircraft—to the U.S. military. Isaacman launched Draken (at Lakeland-Linder Airport) and at one point, had the world’s largest fleet of privately owned tactical military aircraft—about 100.

Isaacman has a taste for the high-end, expensive thrill ride and Inspiration4 may be the penultimate. (So far.) The exact cost of this trip is unknown, but it’s believed to be under $200 million and possibly around $100 million. Even if the lower figure is accurate, it will not make orbital space travel accessible to the masses, unless you consider people who can write a check for say, $20 million—or even $5 million—your average first class airline passenger.

These flights are being compared to airline travel but no matter how much SpaceX pledges to shave launch costs, the comparison is flawed, if not ludicrous. If your memory has withstood the ravages of time, you’ll recall the Space Shuttle was once touted as “shirt-sleeve technology.” Cheap and readily available. Two vehicle losses in 135 launches put an end to that fallacy. Just as soon as you think you’ve got this rocket thing figured out, something blows up because you deluded yourself into thinking it couldn’t. Not that this should deter anyone. Nor surprise anyone.

Whether by design or by fate, Isaacman’s choice to fly the first SpaceX tourist mission may be shrewd. The guy’s history shows he’s fiercely genius at seeing business opportunities where others don’t and who knows what kind of inspiration he’ll come back with after 50-plus orbits of the blue marble.

And here the usual tip of the hat to Elon Musk. SpaceX is not quite 20 years in the business, but its launch cadence is killing its competitors, it’s recovering boosters routinely and driving down launch costs. Trips to the ISS are now getting as routine as such things can get. SpaceX has absolutely punked Boeing, who nearly lost its Starliner capsule in a low orbit test and finally, ignominiously, had to send the spacecraft back to the factory. If SpaceX didn’t exist, who would be doing this work?

While I’m down with the idea of space thrill rides in general, I’m naturally inclined to cast a little shade on them simply because I’m not wealthy enough to ever afford one even though I know I am richly deserving of such an experience. If this sounds like I am taking the low road and succumbing to that basest of vile human frailties, jealousy, I freely admit it.

That’s why to set the world right, some billionaire should buy me a seat on one of these things. You could have no more honest set of eyeballs recording the passing scenery as ya’ll fool around with those science projects. I’d resist doing the cartoons.

It went it up, it came down on Saturday evening, splashing down in a mill-pond-calm Atlantic Ocean east of Florida. Fact I didn’t know: That’s the first Atlantic splashdown since 1969. SpaceX has heretofore used the Gulf of Mexico west of Florida and all but one of the Apollo flights were in the Pacific.

Evidently, the flight was flawless. There were some minor issues with a fan and the waste management system, but on balance, Inspiration4 proved SpaceX’s autonomous flight hardware and software. Quite an accomplishment, really.

Press coverage has been mixed thus far. The Washington Post led with it prominently, but The New York Times, Wall Street Journal and a host of mainstream news websites put it well below the fold, to the extent you had to search for it to find it. No soft feature stories on the Sunday morning shows. I find this curious on a weekend of relatively slow news. I think it deserved more.

The Post did run this bit of fascinating video showing the parachute deployment. They got some kinda reefing system on those canopies. You see the drogues deploy, the mains release and then a full 20 seconds before the mains fully inflate. This is nothing new to returning spacecraft but it’s cool to see it in detail.

What they were less good at was the broadcasts from the spacecraft in orbit. The footage I saw was underexposed and the view I really wanted to see—that picture-window cupola pointed at earth—was poorly framed and shot. Given how good SpaceX is at graphics, this was disappointing. Maybe they’ll work on that for the next one, by which time no one will be interested, probably. I’m looking forward to an intelligent interview with Jared Isaacman. In the meantime, Space.com did this (sort of excruciating) report during the crew’s training.

What’s next? It’s going to get interesting and busy. Another SpaceX flight is planned to send three tourists and a professional astronaut to the International Space Station for 10 days. The Russians are about to launch a two-person film crew to the ISS in early October and Tom Cruise is evidently in discussions about a movie shot aboard the ISS. The joint is going be hopping like a 7-11 on Friday night.

Japanese billionaire Yusaku Maezawa is on one of those flights to the ISS and in 2023, he is scheduled to fly to the Moon and back in SpaceX’s Starship vehicle, once the company gets done blowing it up for the test phase. No landing, of course, just a reprise of Apollo 8 with, ironically, eight total people aboard. As Isaacman did for Inspiration4, Maezawa bought all the seats for what Elon Musk said was “a lot of money.” Any guess on what he’s paying? The ISS tickets are advertised at $55 million, so I wouldn’t be surprised if the lunar jaunt costs the full ton—a billion.

Almost as expensive as owning a Baron.