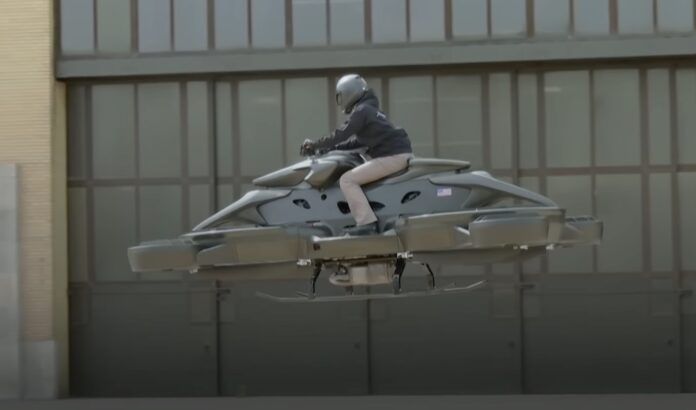 Could it be we are at the one-in-one-out phase of the budding eVTOL market? This week, the outtie is KittyHawk, an early and well-funded entrant into what is imagined as the Urban Air Mobility market. The closure is significant because the company was well along with a couple of designs and seemed to have investment staying power from Google mega-billionaire Larry Page. But the field is crowded and ripe for a shakeout, and UAM is still little more than a concept.

Entering through the revolving door is AERWINS with the Xturismo hoverbike it debuted in the U.S. this week at the North American International Auto Show in Detroit. They actually flew the thing—briefly—and the website is accepting orders at $777,000 each. Here, take my money!

Xturismo, you take a number in the dingbat parade behind Hoversurf and the New Zealand-based Malloy Hoverbike. The former has a website, the latter an actual flying example. As KittyHawk circles the drain is it cruel to point out that it too made a splash with public demonstrations of a hoverbike at Oshkosh in 2017? Maybe, but not enough to keep me from doing it anyway. Let’s see, there’s also JetPack that showed a sky scooter a few years ago and more recently, the Jetson, which actually makes a certain fever dream sense. The hoverbike idea is as evergreen as the flying car but perhaps a little more realistic, given the power-to-weight requirements and that motorcycle crazies are pre-qualified for purchases of machines of dubious usefulness and even lesser survivability.

Let’s mention what makes these things technically feasible. It’s the same technology that allows a first grader to fly a drone through your dining room window and land it in the living room: highly automated fly-by-wire control made cheap and feasible by buck-a-piece MEMS gyros, microprocessors and high-output brushless electric motors powered by lithium-ion batteries. Once you’ve got all that, it’s just a matter of scaling it up. But it doesn’t scale that easily, as the famous Dubai hoverbike test crash showed. It’s tricky to the get the rates and damping just right so that when homo the sap is in the loop, he doesn’t input variables the code writers never thought of. But it can be done.

The Xturismo appears to be another hack at the problem. The company offers few details on its power and control architecture, but it’s not all-electric. It might be thought of as a hybrid or an electric-assisted ducted fan. I just made that last one up, but what the hell, I’m traipsing through fantasyland here so who’s going to tell me not to do it? Get your own fantasy.

As is obvious, the Xturismo has two big fans and four smaller ones arrayed around the perimeter of the machine. Some of the reporting says the powerplant is a 228-HP Kawasaki motorcycle engine, which sounds like the motor from an H2 track-only Supersport. The photos don’t reveal enough detail to suggest whether the two main fans are electrically or mechanically driven from the engine, with some kind of direct drive. If that’s so, then the Xturismo would be a serial hybrid, like a diesel-electric locomotive. If it’s mechanical drive—my bet—then it must have a belt, chain or driveshaft arrangement of some kind.

I think I’d opt for the third choice because if one of those fans providing the primary thrust fails, you’d have a serious asymmetrical thrust problem. I would guess that the outer fans provide fly-by-wire pitch and roll and would have to be electrically powered, which you’d need to rapidly vary thrust for stabilized flight control, like a multi-rotor drone.

Quoted specs for this thing are a little, ummm, fuzzy. One gave an altitude limit of 20 inches. There’s wisdom in that number. Personally, that’s about as high as I’d be willing to fall, although the demo pilot climbed to at least five or six feet. Well, he was actually spam in the can, since the demo was flown by a remote operator. (Is it just me, or does the rider look as nervous as a 62-hour student on first solo?)

The website gives the cruising range as 40 km or 25 miles. Conceding I’m analyzing this from moon beams, this strikes me as odd. If it’s hydrocarbon powered by an H2 engine, it surely ought to run more than 30 minutes. The specs further say it has a battery, so maybe the electric control fans are battery powered only and have no ability to operate from an onboard generator. Not the best idea, but maybe unavoidable given the power requirements.

All of this is but amusingly academic for the U.S. market. At 300 kg (660 lbs.), the Xturismo is far too heavy to qualify as an ultralight so it will fall into the emerging but murky world of certified eVTOL aircraft. Or an aircraft of some kind, thus requiring a pilot certificate, too. (AERIWINS plans another less expensive version.) Perhaps it’s a new category: multi-rotor sport aircraft. Evidently, in Japan, it’s not considered an aircraft, which may be why AERWINS imagines it to be suitable for first responders and law enforcers.

Sure, why not? That’s as good a placeholder as any to draw in more investors until this project goes the way of Kittyhawk, which had more financial backing, I’m sure. These projects will keep coming (and going) because the technological underpinnings I described above exist and will continue to improve and become more accessible. And there’s enough venture capital on the sidelines to fund them, fueled by enough people who think their project will be the one that breaks through. Or who are just amused by wacky ideas and can afford to watch them crater.

And you know what, good for them, because one or some of these projects will eventually break through. As electric and distributed propulsion advances, the curves—performance, cost, market appeal, applications—will eventually merge into something that works. The world needs visionary ideas and if some of them inhabit the lunatic fringe, it has ever been so. Distributed electric power is not going to suddenly vanish as we veer enthusiastically back toward fossil fuels. The evolution has started, there’s just going to be a lot of wrecked hoverbikes on the way.