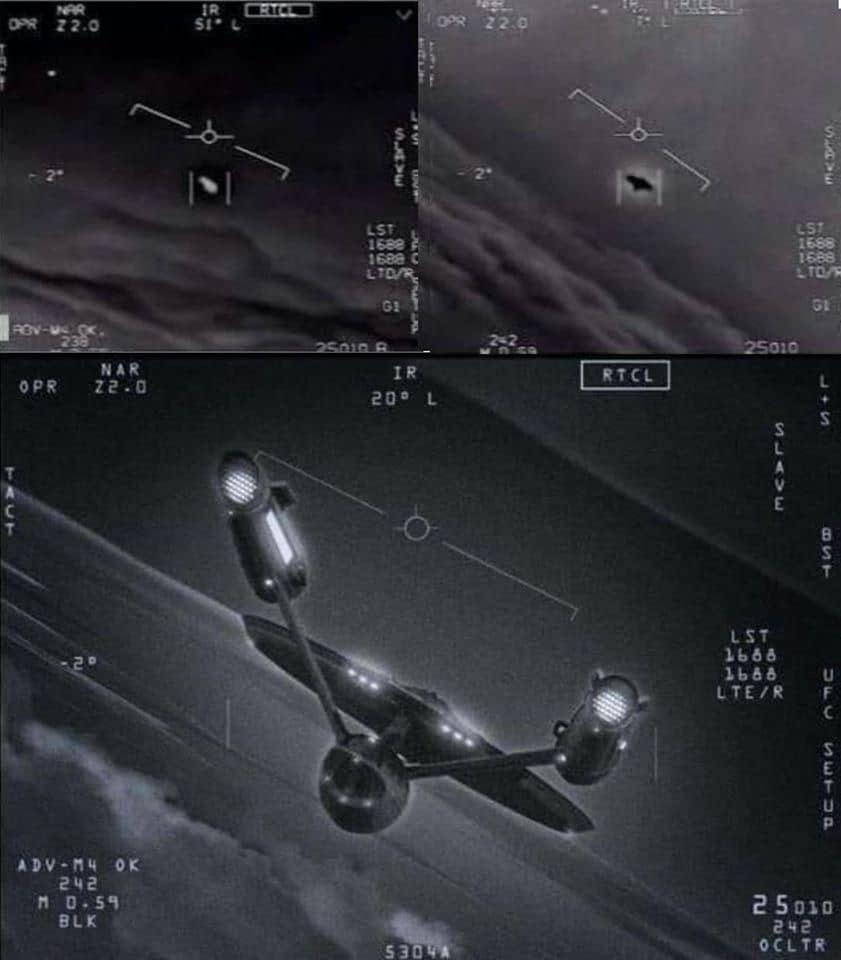 In my (sometimes) fevered imagination, I can conjure tense meetings in a windowless government conference room where well-meaning functionaries and assistant sub-secretaries are arguing about who’s going to do it.

The “it” in this case will be done by the poor bastard who has to push the send button next month on the report detailing what the government knows about UFOs. Along the way, they—or someone—has softened up the target by changing the name: UFOs are now UAPs for unidentified aerial phenomenon. This evidently dates back about 10 years but, like me, you probably never got the memo. It’s a thoughtful change because at one stroke it removes the crackpot stigma and broadens the definition to include swamp gas and hot air balloons made of popsicle sticks and laundry bags. The official imprimatur happened last August when the Defense Department announced the UAP Task Force, whose job is to get a handle on all these sightings and illuminate us as to their origin.

Godspeed, UAPTF. Next, on to Middle East peace.

Why this is going on now appears to relate to an uptick in UAP sightings and not just sightings, but credible incidents. Press coverage of the topic has heated up. The New Yorker just published a major article on the topic and CBS’s 60 Minutes did a segment on UAPs that barely lifts the Dingbat Alarm off the low stop. So, during the month of June, we as aviators will be confronted with some kind of government report that will invite—if not force—us to think about what all this means. I’m already feeling the stirrings of a migraine.

The Defense Department is in a tight spot here. You’ll recall, probably, that it closed down the initial investigation into UAPs (UFOs then) in 1969, when Project Bluebook ended, thus causing a collective sigh of relief from several thousand 2nd lieutenants who trembled at the thought of being assigned to it. Not a real bright career path, that one. Since then, the DoD has basically treated the field with benign neglect, carried on by those second Johns who are now retiring one stars. But now, at the insistence of congress, the UAPTF has determined it will tell the teeming masses what it knows about UAPs. My prediction is that this is going to be: not much. And this will sow more confusion and distrust than ever because two-thirds of the population think the government knows more that it’s telling and almost half—call it 150 million people—think the sightings are alien spacecraft. A measurable portion of them think aliens are living among us, an understandable conviction to anyone who has spent time in the Fly Market at AirVenture.

Before I go any further, let me note that UAPism is a peculiarly American fetish. Check this out. This a geo-located map of all the known sightings since 1906. It cuts off in 2014, seven years ago. Note that as time advances, there are bits of dots located elsewhere in the world, but the U.S. is splattered in activity, especially east of the Mississippi. Well, sure, that’s where the people are, but the U.S. ranks third of countries in total population but 174th in population density. In other words, we are way the hell over-represented in claimed UAP sightings.

There may be explanations for this related to press freedom, not living in a police state and that we fly airplanes a lot, but I wonder if the larger driver isn’t cultural and a tendency toward media—especially social media—driven mass hysteria. In other words, are the vast majority of these sightings just utter confections made by well-meaning people who have just convinced themselves that what they saw was real? On the scale of things, this seems far more likely to me than aliens or even some super-secret Air Force or Navy aircraft.

Not that I’m suggesting that none of these sightings are credible. Watch the interviews in the 60 Minutes piece. These are three Navy pilots who are, among other things, trained to observe and identify aircraft because their lives depend on that skill. There are a couple of short film clips from those sightings and others. It’s not impossible that these were doctored in some way and any critical viewer should keep this in mind. But however convincing these sightings are or are not, the observers themselves are credible. Same can be said for Christopher Mellon, a former deputy assistant SecDef who says the U.S. has no aircraft capable of the performance these sightings seem to show. But that doesn’t rule out that he knows something and is engaging in active disinformation in the name of some greater good.

And that gets us to the Russians and the Chinese. If it’s not aliens, then it must be one of them, right? On my hysteria versus reality scale, this one again tips to hysteria. The leap of progress evident in the surmised performance of the observed UAPs would be far greater than the Apollo leap to the Moon. The Chinese have a sort of capable Fifth Gen fighter but have been unable to muster the industrial know-how to build an airliner competitive on the world market. The Russians have done little better. That either one of them has somehow birthed an aircraft with 100 times the performance of the flying submarine in “Voyage to the Bottom of the Sea” strains credulity beyond the breaking point. Aviation Week would be all over this.

And at this juncture, any aliens with galactic flight capability would presumably be able to tune in reruns of “Voyage” and if that didn’t convince them to give this place a pass, one episode of “The Beverly Hillbillies” would push them over the edge and on to the next star system. I mean, by now, wouldn’t the alien visitors have revealed themselves and their purpose rather than taunting a couple of Hornet drivers?

But what if the UAPTF actually is the aliens? And the June announcement is the big reveal? Didn’t think of that, did ya? Of course you didn’t. Because you’re still grounded in sanity, like the dwindling rest of us.