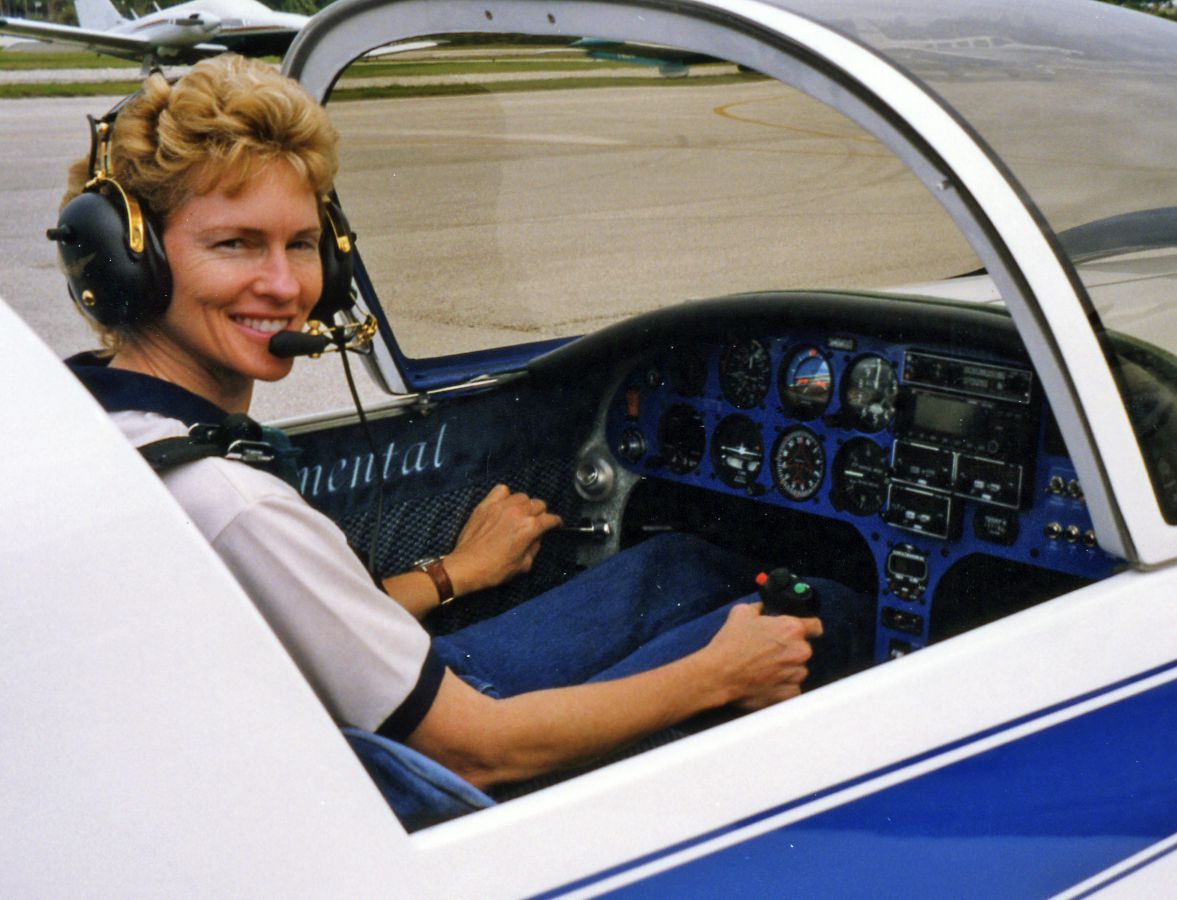 From constructing play forts to rigging her little red wagon up to a self-propelled lawn mower for a wild ride down the street, pilot, writer and A&P Lisa Turner grew up with an interest in building things. It was an interest she chose to pursue—not a common path for a girl in the 1960s. She also grew up with a dream to fly, which she solidified when she decided to build her own airplane. Turner’s journey is chronicled in her recently published book Dream Take Flight: An Unconventional Journey.

Turner’s story is marked by decisions to go her own way. In spite of expectations that she teach English shop after graduating with a Bachelor of Arts in English and philosophy, she instead opened a bicycle shop. She later sold the shop, returning to school to study engineering and eventually becoming a manufacturing engineer. Over the years, she has held positions including human resources director, business coach, home inspector and chief training officer for Tyco Fire and Security Services.

Her first flight lessons came when, after she finished her undergraduate degree, her pilot brother-in-law gave her a gift of flight lessons through solo. After soloing in 1975, her private pilot training got put on hold until two decades later, but the flying dream never faded. She returned to the air in 1995 and got her private pilot certificate. “Once I had my pilot’s license, I couldn’t wait to visit family and friends in an airplane,” Turner said. “I went in to the flight school one day and asked about the rental. To my dismay, I found that taking one of their airplanes on a five-hour round trip overnight was prohibitively expensive.”

Not to be deterred, Turner decided to build her own plane instead. She took a trip to Sun ‘N Fun to find the right aircraft to build, narrowing her list down to three kits. After a visit to the factory, she chose the Aero Designs Pulsar XP and on March 22, 1996, at 45 years of age, she began construction in a two-car garage. According to Turner, one of the earliest challenges she faced in building her plane was convincing friends and family that she wasn’t completely crazy.

She also worried that she might not know enough to build an airplane. “In the 1990s the kits were good, but perhaps not as complete as the kits you buy now,” she said. “I needed to source wiring, avionics, upholstery, choose the engine, purchase additional hardware, and make some upgrades—brakes for example. I wasn’t happy with the heel brakes and designed a toe brake setup that would work with the Matco disc brakes.” With the goal of flying her own plane firmly in mind, along with a developing love for the process of building an aircraft, she met the challenges and on Dec. 6, 1997, after about 20 months and 1,835 build hours, her Pulsar was ready for the skies.

Once the plane had been thoroughly tested, Turner set her sights on her next aviation venture. She undertook a 4,000-mile round trip journey from south Florida to Bar Harbor, Maine, and back in her new aircraft. In spite of some difficulties, including fog, severe turbulence and a clogged fuel filter, the trip was successful in more ways than one. Her favorite part of the trip, she says, was the joy of flying. “I was amazed at the experience. It was more exciting and life changing than what I had envisioned in my flying dreams.”

The journey also allowed her to reconnect with her family. “During the build, they were uncertain whether it was a good idea or not,” Turner said. “Once I arrived in Maine, they greeted me with open arms. I’d not only built the airplane; I’d reconciled with family. I finally got to know my dad, who had left the family when I was six years old.”

An avid writer since high school, Turner began a book about her experiences shortly thereafter. “Once I returned from the trip, I couldn’t not write,” she said. “It just bubbled up. The whole experience of building and flying the Pulsar was life changing for me, and I wanted to share that. My thinking was that if just one person gets inspired to do something they have always wanted to do, then I have accomplished my book writing goal.”

The scope of the book evolved, becoming not just a catalog of her time building and flying the Pulsar, but a memoir exploring the events that brought her to that point, what it took to realize her flying dreams, and the lessons the experience brought with it. Turner struggled with and overcame feelings of being overwhelmed by her writing project. “I’d put it down, thinking that no one would be interested,” she said. “Then I’d pick it up … because the story was trying to get out. Not being able to forget the spectacular experiences of the flight, I kept going.” Twenty years after she started writing it, Turner’s Dream Take Flight: An Unconventional Journey was published last month. You can learn more here.

Turner has been active in the Experimental Aircraft Association (EAA) for 24 years. She is a member of EAA’s Homebuilt Aircraft Council and an Amateur-Built FAA Designated Airworthiness Representative (AB DAR). She taught EAA SportAir Workshops from 1999 to 2006 and in 2015 she became the first woman to receive the Tony Bingelis Award for her work as a volunteer EAA technical counselor.

Turner is also getting ready to start her next aviation-oriented book, which will focus on her husband and his work restoring antique aircraft. In addition to the Pulsar XP, she has completed a Kolb Twinstar Mark III and is currently doing research before she decides on her next airplane to build. Her family, she says, is no longer surprised.

For more information on Lisa Turner and her writing visit her website.