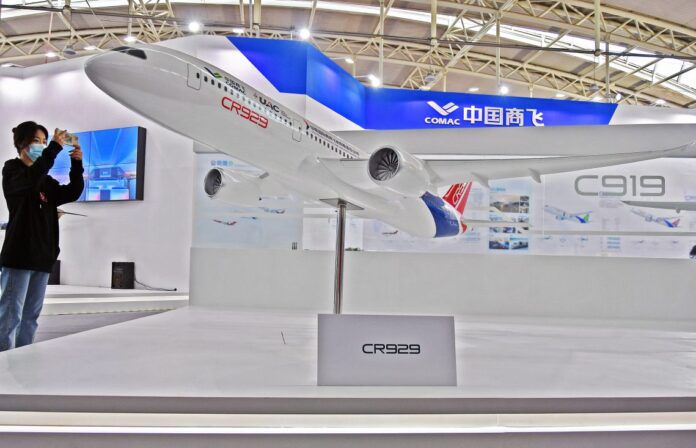 The six-year partnership between Russia and China to develop a widebody airliner is on the rocks essentially because neither side trusts the other. Russia is accusing China of trying to pillage its technology and China is accusing Russia of trying to dominate its domestic airliner market with the CR-929. “China’s goal is to acquire new technology wherever and however it can—including by stealing,” wrote Junhua Zhang in an essay published by Geopolitical Intelligence Services AG. “But Russia’s refusal to share its tech secrets may doom a joint aircraft project.”

The two countries announced the deal in 2016 and the writer asserts that the payoff for China was getting its hands on Russia’s new big turbofan, the PD-35, Russia’s main contribution to the effort. China is to build the fuselage, wings and control surfaces for integration of the engines and other technology that it doesn’t yet have the domestic capability to produce. He said Russia doesn’t want to give up those secrets. Meanwhile, Russia is contemplating going it alone on the project with an eye to selling hundreds of the jets to Chinese airlines, which are expected to continue rapid growth. “China’s aim is clear: It needs to acquire the most advanced technologies,” he wrote. “Russia’s bottom line is also clear: key technologies should never be given to China.”

Meanwhile China is apparently breaking its Boeing habit with the intent of currying favor (and acquiring technology) from Airbus. Chinese airlines recently bought 300 Airbus widebodies for $37 billion, but there’s also another end game. “The aim in damaging Boeing is to pressure the U.S. government into friendlier trade policies with China,” the essay said. For now, the deal is holding but each side is signaling its distaste for the other. Business and diplomacy aside, the essay says China will try to steal technology it can’t buy or bargain for. Two spies have been arrested by Russia for supplying technology secrets to China this year, and Chinese hackers are alleged to have attacked Russian technology companies.